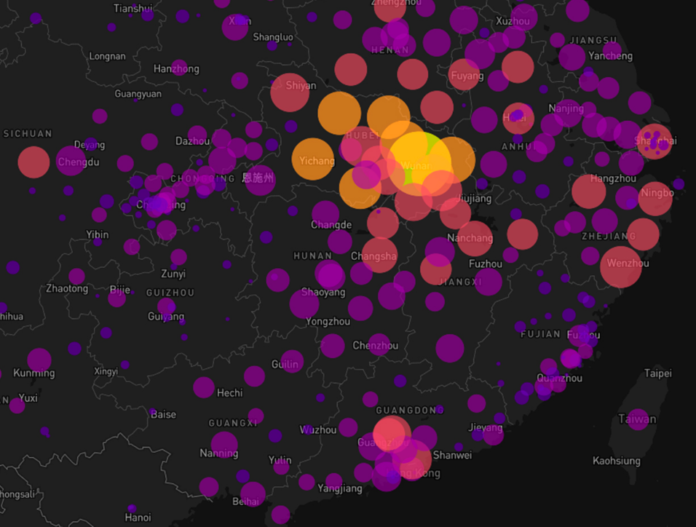 The COVID-19 outbreak, which started in China’s city of Wuhan in late 2019, has been brought under control in the country after unprecedented travel restrictions, case monitoring, and testing. After months of quarantines and lockdowns, the Chinese government has begun urging businesses to reopen.

Northeastern researchers teamed up with colleagues around the globe to understand which aspects of China’s strategy were effective. Their findings, published Wednesday in Science, provide a roadmap for other countries to follow as they try to control the COVID-19 pandemic. “We have the ability to see what worked and what didn’t work in China,” says Samuel Scarpino, an assistant professor in Northeastern’s Network Science Institute and one of the principal authors on the study. “What mattered was isolating individuals who have symptoms, physical distancing, preparing hospitals for surges, closing of non-essential businesses. All those sorts of things were critically important to bring the outbreak under control.”

The researchers used real-time data collected from smartphone GPS locations and other digital traces to show where and when people moved around the country. They combined this with publicly available data on individual cases, which Scarpino and a team of volunteers from Boston Children’s Hospital, HealthMap, the University of Oxford, and other institutions have been collecting since early January.

Their information is sourced from news reports, social media, and health agencies, so the specific data available varies for each individual case (they have documented more than 70,000 so far), but their results are clear: The cordon around Wuhan was too late to stop the virus from spreading within China.

“We’re able to see in real time the movement of people from Wuhan out to other parts of China,” Scarpino says. “The outbreak had already seeded itself all over China by the time that the cordon went into effect.”

“Preventing individuals from leaving an area where the virus is present can be effective in stopping the spread, but only if it is done early,” says Moritz Kraemer, an epidemiologist at the University of Oxford and first author on the study. “Once the virus is out, it’s out.”

That’s when measures to keep people at a physical distance from each other become much more important, Scarpino says. The virus can be passed from one person to another through tiny droplets produced when a person coughs, sneezes, or just talks, and it can live on some surfaces for days. The most effective ways to keep it from spreading are to keep people away from each other, and from communal areas, and isolate anyone with symptoms.

“Those work to bring the case numbers down and flatten the curve,” Scarpino says. “Then what that allows is for you to implement the kinds of strategies that we see working in places like South Korea, Taiwan, Hong Kong, which is these restrictions of mobility, meaning that individuals coming into the country are quarantined for 14 days, and high rates of testing and isolation of individuals who have symptoms or who test positive.”

But with effective physical distancing, case numbers will fall (even if it’s slower than we would prefer). And with rigorous testing and isolation, countries can stay ahead of the virus.

“These measures work, they just take time,” Scarpino says. “Then you can implement this highly successful test, isolate, quarantine procedure and start to bring back some aspects of normal life.”