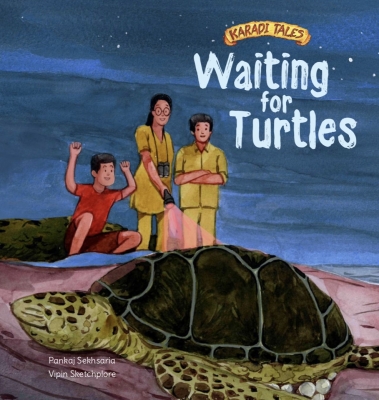 New Delhi– Children’s publishing house Karadi Tales has brought out an illustrated book to raise awareness about the oldest group of reptiles, turtles through a story happening on the ecologically fragile Andaman & Nicobar Islands (A&NI).

Authored by Pankaj Sekhsaria, a long time researcher of the A&NI, the book also enlightens readers about the Islands and the various environmental issues surrounding turtles through its informative back matter, a release from Karadi Tales said.

The story is illustrated exquisitely by Vipin Sketchplore, it said.

‘Waiting for Turtles’ is Sekhsaria’s first book for children. An environmental researcher, he has earlier written ‘The Last Wave’ and ‘Islands in the Flux’ among others.

“The story unfolds on the small island of Tarmugli in the Mahatma Gandhi National Park in the Andamans. Protagonist Samrat is accompanying Seema, his turtle researcher mother, in the hope of seeing his first nesting Green sea turtle that nests on the beaches here. There is disappointment for Samrat but there is also a surprise…,” the release said.

Through the story, the book sets out to raise awareness about the oldest group of reptiles, turtles. It also enlightens readers about the Andaman and Nicobar Islands and the various environmental issues surrounding turtles through the informative back matter, the release said.

“The book beautifully captures Samrat’s excitement about the magic of turtle nesting and will inspire children to think of studying and working in this field of science. The illustrations on every page take you to the shores of Tarmugli Island, where you can almost see the stars and feel the breeze. This is experiencing nature vicariously. A must-read for every child!” said Director, Environment Education, WWF-India, Radhika Suri.

It has also been published in translation in Hindi by Karadi Tales with support of the Dakshin Foundation and in Telugu by Manchi Pustakam. (IANS)