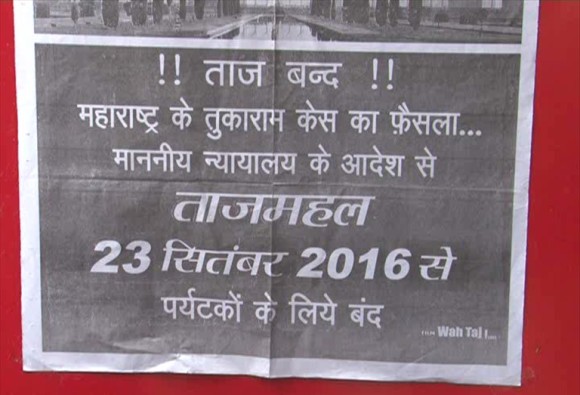 Mumbai– Actor Shreyas Talpade, who has been mired in a legal controversy owing to a publicity gimmick for his forthcoming film ‘Wah Taj’ is apologetic for hurting sentiments.

“It is disturbing. But if somebody’s sentiment is hurt because of us, we have said it repeatedly that we are sorry. We didn’t do anything intentionally,” he said in an exclusive interview.

As part of the film’s promotion, its makers distributed posters across Agra in Uttar Pradesh, stating the Taj Mahal will be shut for tourists from September 23, the release date of the film.

A notice was sent to ‘Wah Taj’ maker Abhinav Verma, director Ajit Sinha and actors Pawan Sharma, Shreyas and Manjari for creating chaos in Agra and spoiling the image of the country.

Shreyas feels he is fortunate enough to shoot around the beautiful monument.

“I saw Taj Mahal for the first time when I came here to shoot. We started our shooting on the Yamuna banks. Watching the Taj, when the first ray of sun was falling on it and at the time of full moon, was quite an amazing experience. I think we were so fortunate to shoot around the symbol of love.”

The ‘Iqbal’ actor, who will be seen in a farmer’s role in the new film, said playing a Maharashtrian is quite easy for him as it is his mother tongue.

Unlike his ‘Welcome to Sajjanpur’ character Mahadev, the 40-year-old actor said Tukaram (Wah Taj) is quite aggressive.

“Tukaram is little stronger than how Mahadev was. He has a firm conviction about his issues and he knows he will win. In spite of knowing that what will be the consequences he goes for it.”

Directed by Ajit Sinha, ‘Wah Taj’ highlights the story of a farmer’s struggle against a corrupt political system. The film also features Manjari Phadnis in a lead role.