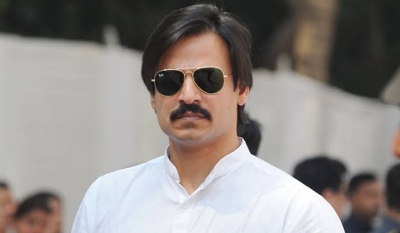 Mumbai– In a career spanning almost two decades, Vivekanand Oberoi has brought a broad spectrum of characters to life. But, there are days when a scene or a sequence leaves an actor completely knackered given the trainwreck of emotions that they have to go through.

Vivek Oberoi recently said that whenever things get too dark on set, he picks up the phone and calls his kids to make things bright.

Talking to IANS, the actor spoke about how there are days that take him to a dark place, he said: “While I am very possessive and protective about my characters, a few days of performances can take you down. When you’re doing a death scene as an actor, either you’re dying or someone else is dying, that’s a big deal for me in terms of personal fear of losing someone whom I love because I have lost people whom I loved at a very young age that provokes a very dark downer inside me.”

However, he has his own way of getting out of the emotional vortex of a scene and swimming back to the shores of Vivek Oberoi, the person, “But, I have developed my own techniques to get out of that emotional vortex. When nothing else works, I just pick up the phone and video call my kids. And that’s like an instant reset button, when I see them talking to me, the minute I see them smiling, my life changes in a snap.”

Be it the ambitious gangster in his debut film ‘Company’, a classic Hindi film hero in ‘Saathiya’, an agent of change in ‘Yuva’ or the associate of a bahubali in ‘Omkara’, the actor has portrayed these characters with aplomb and has always tried to push the envelope with his work.

Ask him how things have changed over the years in terms of performance and the audience, and he says: “As an actor, I make an attempt in small places to push myself to work on small nuances like pulling off a shot with just the expression and not the dialogues.”

“Ten or 15 years ago when I was new in the industry, if I had to say ‘Badla’, I would have to shake 15 muscles on my face to evoke that expression. I’d have to chew on teeth and grind them so hard that it’d require me to visit a dentist (laughs). But now, it’s just dead, poker and it’s real. The audience has grown up in that sense to appreciate the art of subtlety and I love that”, he concludes. (IANS)