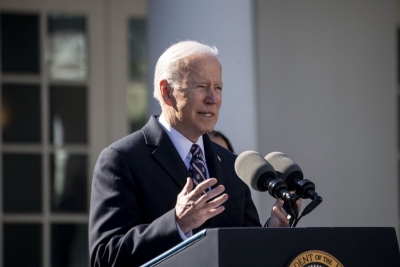 Washington– US President Joe Biden said that the Second Amendment, which protects the right to keep and bear arms, to the nation’s constitution “was never absolute” in gun control push.

“The idea of these high-caliber weapons is of, there’s simply no rational basis for it in terms of thinking about self-protection, hunting,” Biden told reporters after arriving at the White House for Memorial Day events.

“You couldn’t buy a cannon when the Second Amendment was passed.”

The remarks came as the national debate over gun control renewed by May 24 mass shooting at the Robb Elementary School in Uvalde, Texas, that left 19 children and two teachers dead.

The Second Amendment to the US Constitution, ratified in 1791, has been a subject of debate on gun rights.

Biden said it is up to Congress to act more profoundly on assault weapons and gun sales, saying that “I can’t dictate this stuff”.

“I can do the things I’ve done and any executive action I can take, I’ll continue to take. But I can’t outlaw a weapon. I can’t change a background check. I can’t do that,” he explained.

Asked if he is optimistic about getting a deal to combat gun violence after Senate Republican Leader Mitch McConnell said last week that he had tapped his colleague, Senator John Cornyn from Texas, to negotiate with Democrats, Biden replied: “I don’t know.”

“McConnell is a rational Republican. Cornyn is as well. I think there’s a recognition on their part that they, we can’t continue like this. We can’t do this.”

Biden and First Lady Jill Biden travelled to Uvalde on Sunday to meet families of the victims and survivors of the massacre which was carried out 18-year-old Uvalde High School student Salvador Rolando Ramos, who was shot dead by the police shortly after the shooting.

Ramos used an AR-15-style rifle, a popular range of semiautomatic weapons, to carry out the attack.

The US has over 20 million AR-15-style rifles legally in circulation, according to the National Shooting Sports Foundation, a national trade association for the firearm industry.

That accounts for only a small percentage of the roughly 400 million guns in the nation, but the popularity of AR-15-style rifles has been growing significantly ever since a federal assault weapons ban expired in 2004.

More than 17,000 people have died in gun-related incidents across the US over the past five months of this year, including nearly 640 children and teenagers. (IANS)