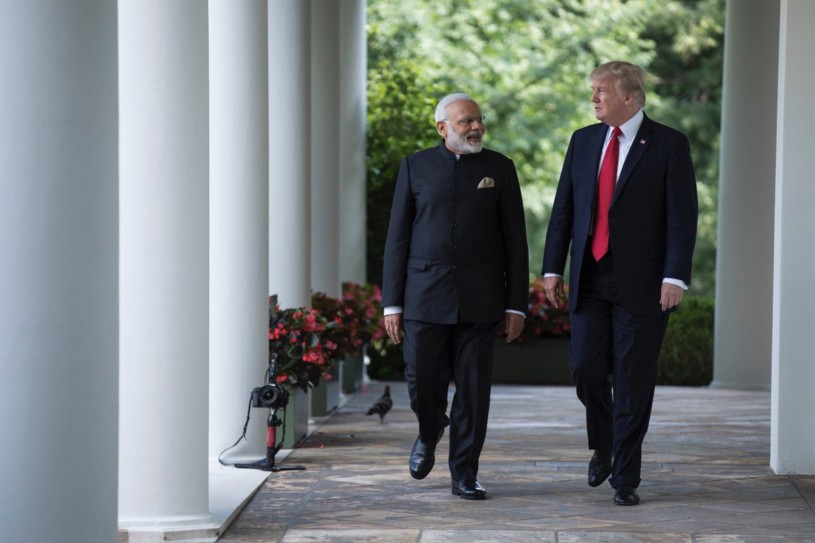 Washington– In a strong message to Islamabad, the US and India have told Pakistan to ensure its territory is not used for terror attacks on other countries and asked it to bring to justice terrorists blamed for attacks in Mumbai and other places in India.

A joint statement issued after US President Donald Trump and Prime Minister Narendra Modi met here late on Monday stressed that terrorism was a global scourge that must be fought and terrorist safe havens rooted out in every part of the world.

The statement said India and the US will fight together “this grave challenge to humanity”.

The statement specifically referred to the terror attacks in Mumbai (2008) and Pathankot (2016) that it said were perpetrated by Pakistan-based groups and said the terrorists must be expeditiously brought to justice.

The two countries expressed their commitment to strengthen cooperation against terrorist threats from groups including Al Qaeda, ISIS, Jaish-e-Mohammad (JeM), Lashkar-e-Taiba (LeT), D-Company and their affiliates.

The LeT was blamed for the Mumbai mayhem of November 2008 that killed 166 Indians and foreigners including Americans. The Jaish was accused of attacking the Indian Air Force base at Pathankot in Punjab, leaving seven security personnel dead. 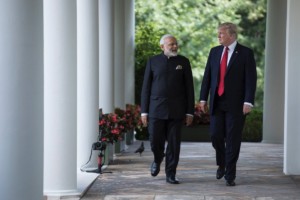 India appreciated the US decision to designate the Pakistan-based Hizbul Mujahideen leader Syed Salahuddin as a Specially Designated Global Terrorist – just ahead of the Trump-Modi meet of Monday — “as evidence of the commitment of the US to end terror in all its forms”.

In their remarks to the media after delegation level talks, both Modi and Trump spoke of their commitment to combat terrorism.

Modi said battling terror and destroying terrorist hideouts would be an important part of mutual cooperation.

“We will enhance the intelligence exchange to boost coordination to address our common concerns over terrorism and will deepen our policy coordination accordingly.”

He said India and US were concerned over growing instability in Afghanistan due to terrorism. He said the two countries will maintain close consultation, communication and coordination to ensure peace there.

Trump said both India and the US had been struck by terrorism, “and we are both determined to destroy terrorist organisations and the radical ideology that drives them.

“We will destroy radical Islamic terrorism,” he said.

“Our militaries are working every day to enhance cooperation between our military forces. And next month, they will join together with the Japanese navy to take place in the largest maritime exercise ever conducted in the vast Indian Ocean.”

“You should take the step for what it is. It is in a sense fixing responsibility, highlighting a problem.

“There is a context to it… It is focusing on a particular group and a particular individual… I think none of us can really miss that message.”

The Foreign Secretary said there was a broad discussion on Pakistan. It was also extensive and very detailed on certain issues.

“We had very much converging viewpoint of what is the problem, let us diagnose the problem. And it is not just the Indian situation… A lot of discussion related to what was happening in Afghanistan.”

The joint statement announced increased cooperation to prevent travel by terrorists and to disrupt global recruitment efforts by terrorists by expanding intelligence-sharing and operational-level counter-terror cooperation.