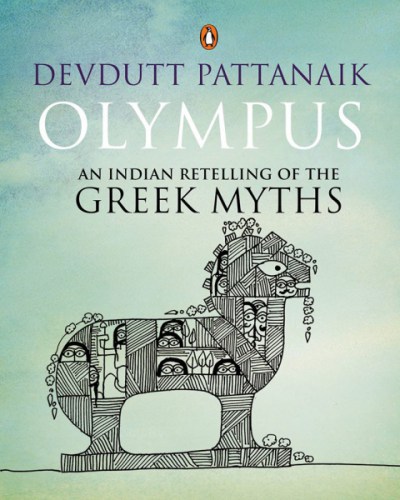 The Ancient Greeks’ enduring contributions to the world are the idea and practice of democracy, a system of philosophy but, above all, a colourful mythology whose influence, and reinterpretation, still permeates art, language and popular culture — as the success of the Percy Jackson books and movies show. But how does it compare with another tradition of similar vintage?

Given two of their most prominent heroes have the same vulnerable spot, a major epic deal with an overseas expedition to rescue kidnapped queens, their pantheons have specific deities for wisdom, and many other similarities (but also key differences), a comparison of Greek and Indian mythologies, both of which have been extensively written about but never fully contrasted, would be quite interesting.

And fulfilling this need with this book is India’s own “biographer and storyteller of the gods”.

Devdutt Pattanaik notes that while there are many books by “Western scholars to ‘explain’ Hindu mythology, but very few by Indian scholars that bother to ‘observe’ Western mythology”, and offers this work as “an attempt to bridge that gap”.

But he does not only provide yet another account of Greek mythology, but goes deeper to also weigh on the social and cultural millieus where it and its Indian counterpart flourished and the worldviews (finite, linear, seeking change; circular, allowing the world to change, respectively) they underpinned and fostered.

And Pattanaik, who describes himself as “a medical doctor by education, a leadership consultant by profession and a mythologist by passion”, provides an superb framing device too.

He chooses as his narrator, none other than the world-conquering hero who brought the Indian and Greek worlds — which did have some contact and one of the principal Greek gods is said to have been to India — much closer than ever for the next few millenia, and left such an impact that his name is hallowed in the subcontinent till now: Alexander the Great himself.

The story is from Alexander’s camp somewhere in what is now Pakistan as the king learns his weary soldiers don’t want to proceed further into the hot land, and his spies cite the alleged malefic effect of a naked sage nearby. His curiousity piqued by the effect of the gymnosophist, of whose ilk his tutor Aristotle had told him about, Alexander goes to question him.

But it is the latter who questions him and “an Upanishad was about to happen” between the warrior and a sage, as the ruler of most of the known world finds himself retelling “tales he heard long ago from his mother and father, servants, slaves, soldiers and tutors”.

In the eight sections “Zeus”, “Minos”, “Oedipus”, “Heracles”, “Jason”, “Helen”, “Odysseus” and “Aeneas” (an anachronism, as the “Aeneid”, which tells this story would not be written for another three centuries), Alexander acquaints his interlocutor with the Greek gods, and heroes and their quests. A brief preliminary interlude provides a reflection into the two interlocutors’ reactions and worldviews.

And while Pattanaik covers a lot of ground in his own quest, providing readers who think they are well acquainted with the subject, some new knowledge. (Did you know the ultimate tragic fate of Helen of Troy?)

But what makes this work stand out is that before his subject proper, the author seeks to provide a concise conceptual overview, which seeks to identify an underlying, uniting basis of Greek mythology with philosophy, its difference with the Abrahamic mythology, that inspired the three Semitic religions, which would wipe it from practice.

Then, in a separate box, he provides a contrast, in all its similarities and differences, with Indian mythology, and this can be found in every section subsequently.

Pattanaik goes on to give us a fast trip of a strand of civilisation, from the Ancient Greek world to the present era of Globalisation, during which he also offers a explanation (rather simplified and debatable) of the division between India and Bharat, as well as a vigorous contrast of Western and Eastern (chiefly Indian) thought.

Ultimately, Indian readers don’t end with knowing all about Greek mythology, but their own too, and the curious ways in which cultural motifs travel and influence each other. (IANS)