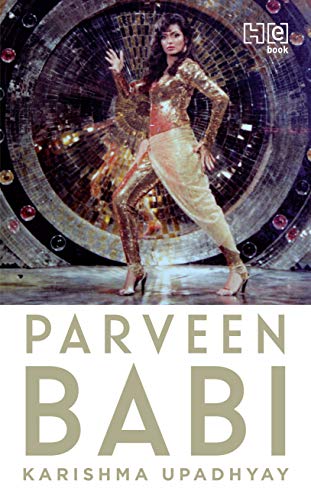 New Delhi– Parveen Babi truly lived life king-size, redefining the manner in which actresses portrayed themselves on the big screen, being cast in over 50 films with every Bollywood A-lister worth the name; appearing on the cover of TIME magazine and recovering from two mental breakdowns but in the end, dying a lonely death — sadly, just a name for the present day Hindi film industry and cine-goers alike.

“With characters like Anita from ‘Deewar’, Parveen changed the kind of roles our leading ladies played on screen. Anita had both sexual and economic autonomy.

Parveen was also instrumental in changing how our actresses look on screen,” says her biographer, Karishma Upadhyay, of her book “Parveen — A Life” (Hachette) that should serve as a reminder for the present generation of an actress who attempted to live life on her own terms but lost out in the end.

“My biggest hope with this book is that it helps people understand that it’s possible for someone to be young, successful and living a seemingly perfect life, yet suffer from mental illness. Also, that this illness doesn’t always look like what Hindi films have told us. It is possible for someone to look ‘perfect’ and still be suffering within,” Upadhyay told IANS in an interview.

“It was absolutely exhilarating to research this book. It took me three years to write this book but it was all worth it in the end because I believe I have a book that really captures her life. But it’s also tinged with a streak of sadness because one can’t help but wonder, ‘What if Parveen had gotten the medical help she so clearly needed?’ It’s sad to see that the stigma against mental illness that existed in the 70s and 80s while Parveen was in the industry continues even today,” added Upadhyay, a film journalist considered an expert on Bollywood and who has led editorial teams at several prominent media houses.

Born on April 4, 1949 in the princely state of Junagarh in the present day Gujarat, where her father, Vali Mohammed Khan Babi, was one of the Nawab’s administrators, Parveen’s life as presented by Upadhyay, comes across in four major phases.

The first was in Ahmedabad, where she was sent for her undergraduate studies and where she was in total control to the extent that the calling off her engagement – that her mother had insisted on to maintain “respectability” — didn’t matter a whit.

The second was the shift to Bombay (now Mumbai), initially as a fashion designer and a model, her entry into the Hindi film industry and, most importantly, her three involvements beginning with the rather platonic one with the up-and-coming Danny Denzongpa. She then goes on to disrupt two marriages — that of Kabir Bedi and Mahesh Bhatt — and almost wrecks Danny’s relationship with rising starlet Kim Yashpal.

The relationship with Bedi ended after she travelled with him to Italy in the wake of his success with the TV serial “Sandokan” and realised that he was the bigger star of the two and was receiving the kind of adulation that she had never received in Bombay.

With Bhatt, it seemed more a clash of personalities and the first breakdown happened when neither of these two relationships worked out.

The second breakdown apparently happened after “Arth” — the jury is divided on this — Bhatt’s semi-autobiographical film that laid bare her relationship with the filmmaker.

The third phase centred around Amitabh Bachchan – but was it a case of unrequited love as this was one marriage she couldn’t disrupt? Why was she so paranoid about Bachchan?

Upadhyay explains it thus in the book: “When she began working with Amitabh Bachchan as a co-star, what had started off as a desire and then an obsession to match his ‘perfection’ as an actor had, at some point, evolved into something far beyond that. The few who knew Parveen well at this juncture of her life believe that the nature of her obsession began changing only when she assumed her co-actor was reciprocating her feelings and she wasn’t merely imagining his overtures.

There was another thought playing at the back of her mind: being seen as ‘Amitabh’s woman’ would, she felt, empower her in the eyes of the industry, in addition to helping her in her pursuit of perfection as an actor. The bonus, of course, would be to bask in his love and occupy the centre of his world.”

But that wasn’t to happen.

So, who was the bigger disrupter? Bhatt or Bachchan, even though the latter is generally cast as the villain of the piece?

“What had triggered the actress’s breakdown? Who was responsible for pushing her over the edge? Both the industry and the media were looking for a scapegoat. Depending on whom one interacted with at the time, it was either Amitabh Bachchan’s fault or Mahesh Bhatt’s,” Upadhyay writes in the book.

She, however, hedged her bets in the interview. “Different people have formed different opinions after reading the book. From what I have learned about Parveen’s life, the biggest disrupter/villain in her life was her mental illness,” Upadhyay maintained — leaving the question dangling.

The final phase of Parveen’s life, was her twilight years where she accused everyone from Bachchan, to Bill Clinton, to the KGB et al of trying to kill her — and even accused Sanjay Dutt in the 1993 Mumbai blasts but refused to appear in court to substantiate the charges.

Did the dichotomy between Parveen’s public and private life, as Upadhyay writes in the book, persist throughout her life and was she unable to cope up with this pressure?

“Being a celebrity comes with the pressures of having to look perfect and act with perfect composure all the time. It couldn’t have been easy for Parveen to maintain these standards she had set for herself and that were expected from her as a public figure, while her mind was unravelling,” Upadhyay said.

Pressed further as to whether this was a breakdown or living in a state of delusion, Upadhyay conceded: “I am not a psychiatrist and hence not qualified to pass judgment on anyone. From what medical professionals have told me while writing this book though, it seems to have been a combination of delusions and paranoia.”

“When a person is going through a breakdown, it’s possible for them to believe that everyone is out to get them. This is how it was with Parveen as well. She believed that there were people conspiring to kill her,” she said.

Be that as it may, the circumstances of Parveen’s death — the date’s been recorded as January 20, 2005 — were tragic.

She had been found dead two days earlier after the secretary of her residential society alerted the police that she had not collected milk and newspapers from her doorstep for three days. The police suspected that she may have been dead for up to 72 hours before her body was found. An autopsy concluded that she had not consumed anything for more than three days and starved to death, ruling that she succumbed to total organ failure and the diabetes she had contracted in her later life.

“It was a quiet end to a stormy life. The one constant was her loneliness. It defined her childhood, her desperate need for companionship in her prime and her last days in virtual isolation. Parveen was alone — in life and in death,” is how Upadhyay concludes the book. (IANS)