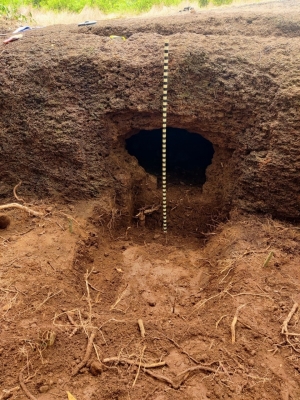 Dakshina Kannada, (Karnataka)– A unique megalithic burial site, dating back to around 800 BC, has been discovered at a cashew nut plantation near Ramakunja village in Kadaba taluk of Karnataka’s Dakshina Kannada district, it was announced on Tuesday.

Based on the information provided by villagers, a team of experts visited what is known as the “Pandavara Guhe” (cave of Pandavas) and found the megalithic site, which had some startling feastures.

“Usually, megalithic burials are marked by stone circles, menhirs, and stone cairns. But, it is the first time in India, a sepulchre is marked by a circle or zero. It brings up interesting questions like did megalith era people knew zero or did they invent it first?” Prof. Murugeshi T., Associate Professor and Dean of the Department of History and Archaeology, MSRS College, said.

In the case which is presently under study, there is no central opening but, a huge engraving of a circle, of about 7 feet diameter, was found above the laterite surface and exactly below this in same dimension, a hemispherical cave with a side opening of about 2 feet in height, he said.

This side entrance is designed like a doorframe and it’s oriented to the north-east direction, he added.

Perhaps, it was the first rock engraving of megalithic period found from Dakshina Kannada, says Prof Murugeshi T., adding that no grave goods were found inside the cave, but, in the centre, an altar-like pit was noticed and it is also curious.

Also very small pieces of red, black, and red pottery were found in small quantities in the cave. Most probably, the cave had been robbed by the locals, the professor said.

There are 2.5 or 3 feet circular openings in the centre cut into the laterite about a metre deep and the bottom is cut into a hemispherical shape with the various depths and circumferences, he said, adding that this type of rock-cut caves are common in the southern west coast of Karnataka.

A small variation is found in Kerala, with side openings in the subsurfce, but central opening was common in both the cases.

Evidence of megalithic culture, including its burial sites and other unique features, has been frequently found in south India, including Karnataka. Coastal Karnataka and Kerala recorded a very special type of megalith phenomenon like rock-cut caves, scooped out in the laterite earth.

“I am thankful to Nischith and his family for their local hospitality and grateful to Yusuf Haider of National Gold and Diamonds, Mangalore for providing the vehicle. I also appreciate my students, Shreyas, Goutham, Shariq, Karthik, Dishanth and Vishal Rai for their 2 days of hard work in excavating the cave,” Prof. Murugeshi added. (IANS)