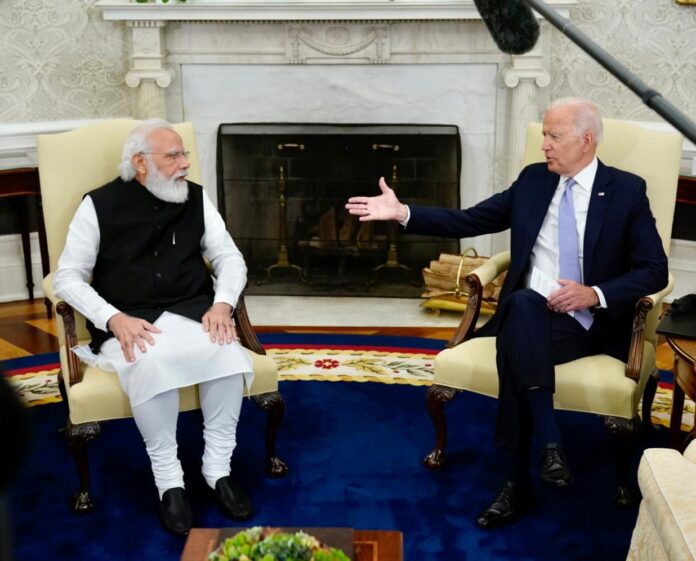 Washington–The Russian invasion of Ukraine and Indian restrictions on wheat exports will be among a range of issues that will figure at the upcoming meeting of the Quad in Tokyo next week and the bilateral between American President Joe Biden and Prime Minister Narendra Modi, the US has said.

Modi and Biden will meet with Japanese Prime Minister Fumio Kishida and Australia’s newly elected Prime Minister, Anthony Albanese, for the second in-person summit of the Quad, short for Quadrilateral Security Dialogue, on Tuesday in Tokyo.

The two leaders will also meet bilaterally, US National Security Adviser Jake Sullivan confirmed in a gaggle with reporters travelling with Biden from South Korea to Japan, the second leg of his first trip to Asia as President.

India and the US have not been on the same page on the Russian invasion of Ukraine. New Delhi has not condemned the invasion withstanding unrelenting pressure from the US and others such as the UK, who had, together with their other allies, have come to Ukraine’s aid with money and materiel with the stated intention of driving back the army of Russian President Vladimir Putin.

The issue was discussed at the highest level between President Biden and Prime Minister Modi when they met virtually in March for a Quad meeting. They discussed it again in a short video conversation that kicked off the 2+2 ministerial dialogue in April. And they will discuss it again.

“It won’t be a new conversation. It will be a continuation of the conversation they’ve already had about how we see the picture in Ukraine and the impacts of Russia’s brutal invasion of Ukraine on a wider set of concerns in the world, including this food security concern,” Sullivan said in response to a question if Ukraine will come up at the meeting of the two leaders.

Asked if the US would push India on wheat exports, the National Security Adviser said “food security will be a topic of conversation at the Quad”.

India’s ban on export of wheat has raised international concerns with western leaders calling for New Delhi to behave more responsibly as the world grapples with shortages caused by the war. Russia and Ukraine together account for about 29 per cent of global wheat exports, and India is the world’s fourth largest producer of wheat after China, the US, and Russia.

Sullivan was also asked a general question about how the Biden administration balanced the priority it accords to democratic and human rights in its foreign policy with the accusations of “human rights abuses and maligning Muslim minorities” in India.

“President Biden has been clear from the beginning of this administration that we’ll speak out when we see any form of departure from or deviation from basic principles, fundamental freedoms, human rights, the values of democratic institutions, and the rule of law. That’s true for a range of countries. And, you know, we don’t single India out,” he said.

He added: “We have found a way both to pursue practical cooperation with countries that are democratic and non-democratic, while, at the same time, being clear and consistent of where our values lie.”

Human rights have become a new source of friction in India-US ties. From ignoring them as in the past, the Modi government has been increasingly more confrontational.