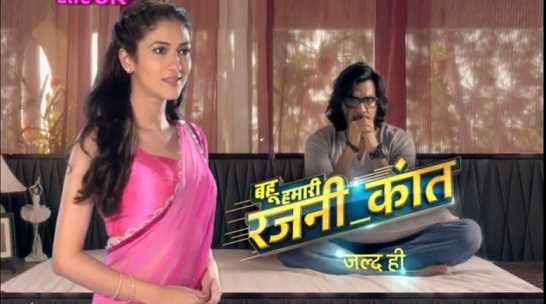 Mumbai–Actor Iqbal Khan will make a cameo in the finale episode of TV show “Bahu Hamari Rajni Kant” as a robot.

“I love it when people try different stuff on TV, and when it works, it is a proud moment. ‘Bahu Humari Rajni_kant’ has been a great show and the audience, including me, has loved it. Amir Jaffar, the producer of the show, is a great friend so I had to do this cameo in the finale episode for him,” Iqbal said in a statement.

Iqbal’s character will change the dynamics of the Kant house in the Life OK show. It is a cameo role and his entry will mark an end to the show which started a year ago on February 15.

Its last episode will be aired on February 13.

Actress Sonali Nikam, who will soon be seen in “Ek Vivaah Aisa Bhi”, has taken inspiration from Bollywood actress Swara Bhaskar for her role in the in TV show.

Sonali will play the role of Suman, who hails from Indore and she has taken up diction classes to learn the typical style of speaking in the Madhya Pradesh city. She was most inspired by Swara’s character from the movie “Nil Battey Sannata”.

“I have taken special training for Indori style of speaking for my character Suman in the show ‘Ek Vivah Aisa Bhi’ so that I can do complete justice with my character. I have also spent a lot of time in researching online to understand the right dialogue delivery on camera,” Sonali said in a statement.

The actress says she hopes that the audience will like the show and will relates with her character.

“Ek Vivah Aisa Bhi” is the story of a young widow, Suman, who due to circumstances gets re-married and lives with two mothers-in-law under the same roof. How she tries to strike a balance and keep them happy, is the crux of the story.

TV viewers are obsessed with humans transforming into animals and insects. And another such instance is coming up on Zindagi channel’s comic parody “TV Ke Uss Paar”.

The show, which portrays Indian society’s obsession with daily soaps, will introduce its own Icchadhari Nagin. Actress Nriti Vaid will play the role of Ananya, the dramatic Icchadhari Nagin.

In the current track, Madhu is determined to get Vivek married, and Ananya will be introduced as the girl next door from the reel world.

Charmed with her beautiful smile, Vivek gets infatuated by her in their first meeting when she helps him get out of the TV world.

Vivek appreciates Ananya so much in front of Madhu that she thinks that Ananya might be an ideal match for him. The TV obsessed Madhu always wanted Vivek to get married to someone from the reel world and decides to get both married.

However, when Ananya turns 25, she learns that she is an Icchadhari Nagin whose newly discovered power changes her attitude, making her character gradually turn grey. Ananya gets more aggressive and pesters Madhu to get her married to Vivek.

Nriti, who has been a part of the television industry for a couple of years and has acted in different genres of shows, was last seen playing the parallel lead in “Piya Basanti Re”.