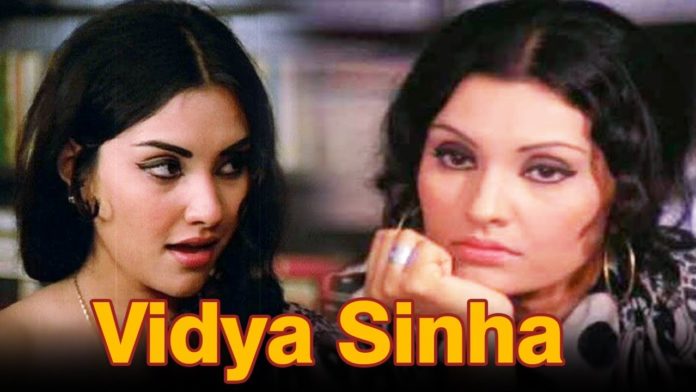 I am at a loss of words to hear about Vidya Sinhas demise, simply shocked beyond words. Till only the other day, I was watching her on the television show, “Kullfi Kumarr Bajewala”. I was felt happy watching her on the show because our association is a really long one. I know her from the days of her first film, “Rajnigandha” (1974). Now, on hearing about her death, I am extremely sad and dont know how to react.

I remember Vidya as a happy-go-lucky person, who radiated joy. I have never seen her wearing a glum expression on her face, no matter how she felt within. I am really struggling for words. I never thought a day would come when I would have to talk about her passing away.

I wrote lyrics for two of her films – “Rajnigandha” and “Chhoti Si Baat” – and although I was not a regular visitor on the sets of these films, we would meet her at events. I have even been to her home a few times.

Director Basu Chatterjee introduced her to the film industry by giving her a break to play the heroine in “Rajnigandha”. She was a new girl, who was a relative of the filmmaker Mohan Sinha. This is all I knew about Vidya when I met her for the first time. Over the years, I saw her grow as an actor.

I still remember the first day I met her. Basu da was shooting at a college in Jogeshwari, near the station. She had a nice personality and greeted me with a smile. Basu da knew how to elicit the best from an actor and prepared her for the role just the way he wanted.

I have known Vidya as someone who was always dedicated to her job. She could be trusted to give her 100 percent to whatever she did. I remember, “Rajnigandha” became a big hit upon release, and (singer) Mukesh ji even bagged a National Award for the song “Kai baar yun hi dekha hai”.

After the success of that film, people started calling her Rajnigandha!

Today, with a sad heart, all I want to say is that Vidya, wherever you are, may you rest in peace. Just as everyone loves the flower ‘rajnigandha’ for its fragrance, you will be remembered for your talent and personality.

(Yogesh Gaur, popularly known as Yogesh, is a renowned Bollywood lyricist of the seventies and eighties. His penned songs for the Vidya Sinha hits, “Rajnigandha” and “Chhoti Si Baat”, besides several hits in films including “Mili”, “Anand”, Baaton Baaton Mein”, Manzil and “Priyatama”)
–As told to Ahana Bhattacharya