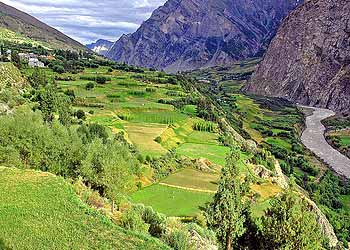 Manali– Taking a leaf from the success of Leh’s Sindhu Darshan festival, locals of the picturesque Lahaul Valley in Himachal Pradesh also decided to hold a similar event every summer at the confluence of the Chandra and Bhaga rivers that makes for a mix of virgin nature and Buddhism.

This year it will be held on June 12 and Union Minister of State for Tourism Mahesh Sharma and Haryana Chief Minister Manohar Lal Khattar are expected to participate.

“We are holding Chandra-Bhaga Sangam Parv at Tandi on June 12 which will see a congregation of Buddhist and Hindu spiritual leaders and followers,” Chander-Bhaga Sangam Parv Samiti President Chander Mohan Parsheera told IANS.

The festival, which aims to promote unity and communal harmony in the country, is the second in the series.

June to September is the best time to visit the Lahaul Valley, dominated by Buddhists.

“Seeing the success of the festival last year, we have decided to hold this festival every year on the pattern of the Sindhu Darshan festival held in Leh,” Parsheera said.

He said the festival would also boost the local tourism industry.

“Last year, more than 8,000 people, mostly locals, participated in the festival. This year we expect more than 10,000 people, including tourists,” he added.

The festival will be held at Tandi village in Lahaul-Spiti district, located on the Manali-Leh highway and some 120 km from here, where both the Chandra and Bhaga rivers meet and give birth to the Chandrabhaga, later baptised as the Chenab river.

The main attraction of the festival includes a concert by 100 violinists and a folk dance by over 1,000 local women, besides traditional ceremonies involving Buddhist prayers by senior Lamas.

Parsheera said priests from Kathmandu’s Pashupatinath Temple and Buddhist spiritual leaders from Bhutan have been invited to take part in the event.

“They will start religious ceremonies on June 2 at the festival venue and will continue till June 12,” he said.

It is believed that Draupadi, the wife of the five Pandavas, breathed her last near the Chandrabhaga’s confluence and her mortal remains were immersed in the river.

Besides the innate beauty of the Himalayas, district headquarters Keylong, situated at an altitude of 10,354 ft, takes you to a land of Buddhism and monasteries and provides a taste of adventure too.

Not open throughout the year, the landlocked Lahaul Valley, comprising over two dozen small and scattered villages, remains cut off owing to heavy snow accumulation from December onwards on the Rohtang Pass (13,050 feet) — the only connection with Manali in Kullu district.

The road links restore only by mid-May when the snows melt. Helicopters are the only mode of transportation for the locals during winter.

The Rohtang tunnel, which is under construction and will run beneath the Rohtang Pass, will ensure all-weather connectivity between Lahaul Valley and Manali.

Official sources said currently public transport vehicles carrying locals and tourists, who are bound for the Lahaul Valley, are allowed to ply across the Rohtang Pass, while the private tourist vehicles would be allowed by next week.

The entire valley is populated mainly by tribals. The climatic conditions of the district are harsh as much of the land forms part of a cold desert where the mercury drops below minus 20 degrees Celsius during winter.

The staple food of the locals is buckwheat. Barley, wheat and rice are also consumed as well as lots of “chhang” (locally-extracted beer) and salted tea mixed with butter.

The consumption of “arah”, a local liquor extracted from barley, and “challo”, or gambling, are part of every occasion of the locals.

The Buddhist-dominated valley in the Himalayan terrain at elevations ranging from 15,000 to 20,000 feet above sea level attracts globetrotters.

Getting to the Lahaul Valley

How to travel: In summer, by public or private transport. From Manali to Keylong via Rohtang Pass.

Distance: 350 km from state capital Shimla to Keylong via Manali.

Shimla and Manali are connected by air from Delhi.

Where to stay: Small hotels, guest houses, and even homestays with local people.

There is also the state-run Chandrabhaga Hotel.