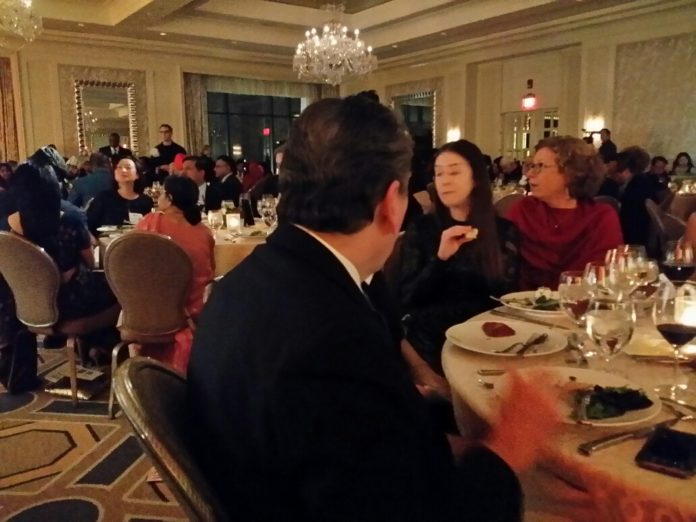 The awards were given by philanthropist and TiE Boston Co-Fouunder and its former president Desh Deshpande. The event was emceed by Jonjy Ananth and entertainment was provided by Avanti Nagral. Iqbal Singh Dhaliwal, executive director of J-Pal at the economics department of the Massachusetts Institute of Technology, introduced Lifetime Achievement Honoree Mr. Sahwney, who currently serves as the Chairman of Ocular Therapeutix, Inc. and of Instylla, Inc.

Previously, Mr. Sawhney served as Chairman of Augmenix, Inc., which was acquired by Boston Scientific in September 2018 for $600 million. Prior to that, Mr. Sawhney founded Confluent Surgical (acquired by Covidien), Focal Inc. (acquired by Genzyme), and Access Closure, Inc. (acquired by Cardinal Health). His innovations are the subject of over 120 issued and pending patents in biomaterials and bio-surgery.

Mr. Dhaliwal said that one of the things that defines Mr. Sawhney is his perfectionism. The second things is the application of analytics to everything he does and the last quality is Mr. Sawhney’s persistence.

Mr. Dhaliwal said that Mr. Sawhney holds to his faith, and still wears turban worn by people of Sikh religion.

“You are a role model for being honest and true to you faith,” Mr. Dhariwal told Mr. Sawhney.

When asked how does he apply faith to his business, Mr. Sawhney said that internal optimism is warranted and when you that faith that success is just around the corner you attract people who have similar values.

“When you have that, magic happens,” Mr. Sawhney said.

TiE Boston President Nilanjana Bhowmik welcomed and thanked everyone and said TiE Boston has generated $50 billion in shareholders’ value and numerous jobs. She also announced the launch of TiE Boston Foundation with a state goal of a $500,000 foundation. She said three-fifth of the goal has been already achieved in few days.

Yvonne Hao is currently the COO and CFO of PillPack. She has held various positions, including Operating Partner, at Bain Capital from 2008 to 2016, and has been the interim CEO or CEO at several companies including Gymboree and D&M Holdings.

PillPack is a full-service online pharmacy that manages medication. They fill, sort, and deliver a personalized packet of medication based on the needs and schedule of the consumer. PillPack was recently acquired by Amazon for $1bn.[Source: Crunchbase]

Dr. Rushika Fernandopulle is a physician who has spent more than a decade of his career involved in efforts to improve the healthcare quality for patients. He is currently the co-founder and CEO of Iora Health. He earned his AB, MD, and MPP from Harvard University where he is a member of the faculty.

Iora Health ensures that every patent gets a qualified personal physician, as well as a personal health coach, who will stay in close contact with patients between visits and helps the patients achieve their health goals.[Source: Crunchbase]

Kris Canekeratne co-founded Virtusa in 1996 based on his core belief that software development practices could and should embrace the same efficiencies achieved by mature industries such as automotive and manufacturing. Kris oversees Virtusa’s strategic direction and all day-to-day operations.

Stefania Mallett has spent over 25 years building and growing technology-enabled companies that solve real business problems. She is currently the CEO and co-founder of ezCater. She also co-founded and successfully sold InSite Marketing Technology.

ezCater is the world’s largest marketplace for corporate catering. They connect businesspeople with a database of reliable corporate caterers that can handle any request, anywhere in the US. ezCater has recently acquired Paris-based GoCater in their first steps to expand the business internationally. [Source: Crunchbase]

Niraj Shah is the co-founder and CEO of Wayfair, where he also serves as a director. He has been included in Fortune Magazine’s 40 Under 40 and has won the Ernst and Young’s Entrepreneur of the Year award. He also serves on the board of MITX, The Greater Boston Chamber of Commerce, the Cornell University Council, and the Entrepreneurship @ Cornell Advisory Council.

Wayfair is the largest online retailer of home goods in the United States. Wayfair employs over 2,300 people across those offices. In 2014, Wayfair’s sales exceeded $1.3 billion [Source: Crunchbase]

Aman Narang is President and co-founder of Toast where he also currently leads innovation and business development initiatives. Prior to Toast, he worked on innovation initiatives at Endeca, now Oracle. (Source: company website)

Darshana Zaveri is currently a Managing Partner at Catalyst Health Ventures and possesses over a decade of experience in the health care and life science industries. She led Catalyst’s investments in a number of well-known companies including Augmenix, Lantos Technologies, nVision Medical, Maxwell Health, Aria CV and Hepregen. She is currently a Director of Lantos, Aria CV, and nVision and is an observer to the boards of Augmenix and Maxwell Health. She currently serves as a Catalyst of the Deshpande Center for Technological Innovation at MIT. Catalyst Health Ventures is an early-stage venture capital firm that invests targeting technology solutions applied within the health care and life science industries. [Source: Crunchbase]

Katie Rae is a veteran of the startup and early-stage investor worlds, both in Boston and Silicon Valley and currently the CEO and Managing Partner at The Engine. She also co-founded Project 11 Ventures, a venture fund that invests in companies in their earliest stages and helps them with building a strong team and vision. She served as Chairman and the Managing Director of Techstars Boston where she led investments in over 70+ high growth startups across many industries while simultaneously propelling Techstars into a global brand. [Source: CrunchBase]

Designed by MIT to support new companies working on scientific and technological innovation, The Engine is a first-of-its-kind organization with a mission to focus exclusively on founders working on these big problems. [Source: company website].

Karl Iagnemma is an authority on robotics and autonomous vehicles whose opinion and commentary has been published and broadcast worldwide on Bloomberg, CNBC, BBC, and many other media outlets. As former director of the Robotic Mobility Group at the Massachusetts Institute of Technology (MIT), his research resulted in more than 150 technical publications, 50 issued or filed patents, and numerous edited volumes, including books on the DARPA Grand Challenge and Urban Challenge autonomous vehicle competitions. Karl is co-founder and President of Boston-based nuTonomy, Inc., the leading developer of autonomous vehicle software. nuTonomy was named a 2017 World Economic Forum Technology Pioneer.

Raghav Gupta is currently COO of Humanics. He has been in founding and leadership capacities in venture-backed tech companies for over 20 years, including Ooyala where he was GM EMEA, Videoplaza as CCO, Brightcove where he was a member of the founding team, and Live365.

Dr. Venkat Maroju is currently the CEO of SourceTrace Systems. He has been able to further the mission of SourceTrace Systems through his extensive experience with technological leadership with extensive grassroots-level experience with social enterprises such as microfinance institutions, farmers’ cooperatives, sustainable agriculture, rural supply chain, and renewable energy.

SourceTrace Systems is a company that has become a global leader in providing software solutions to the agriculture and allied sectors. [Source: company website]

StopLift is best known for having developed the first ever checkout vision system capable of detecting scan-avoidance and “sweethearting” collusion between cashiers and customers.

Ravi Ika is a noted entrepreneur and an innovator of disruptive business solutions. He founded RxAdvance in 2013 and serves as the President & CEO. He launched RxAdvance to lower pharmacy, specialty and avoidable drug-impacted medical costs and achieve better outcomes, quality and compliance in the new era of value-based health care.

Ram Krishnan was the Co-Founder, VP of Strategy & Business Development at VidScale. In March 2018, VidScale was acquired by Ericsson and is part of a new unit called EdgeGravityTM, by Ericsson.

VidScale is a pioneer in the edge-to-edge application and content deployment space. VidScale, in partnership with the world’s mobile and landline service providers, has integrated its cache and compute technologies into privileged operator edges across the world, unifying them on a single platform that are exposed to content owners, platform providers, and application developers.

Founded in 1997 by entrepreneurs who immigrated from the Indus region, TiE Boston champions inclusion in innovation by blending the fundamentals of entrepreneurship with traditional Indian values that place importance on community, mentorship and long-term relationships.