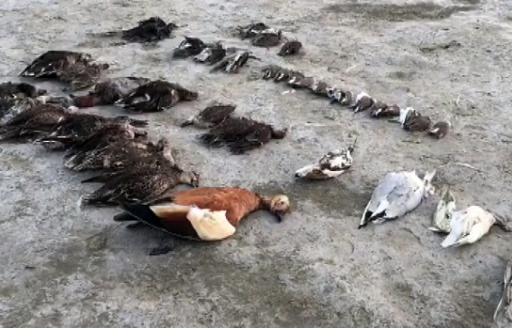 Jaipur– Thousands of migratory birds have been found dead in and around Sambhar Lake in Rajasthan’s Jaipur district, leaving both locals and officials shocked.

India’s largest inland saltwater lake, Sambhar, situated near Phulera in Jaipur, is regularly been visited by tourists and ornithologists from across the world as it plays host to various migratory species of birds including the Northern Shoveler, Green Bee-Eater, Cinnamon Teal coming from Siberia, north Asia and other places.

The death of these birds came to fore when a few ornithologists went to Sambhar Lake for photography on Sunday, and were taken aback to see the dead birds across the lake.

Authorities have begun a probe to ascertain how the winged visitors succumbed.

Forest ranger Rajendra Jakhar said: “The reports of viscera test (of the dead birds) are being awaited to gauge the reason of the deaths of these birds. In fact, we are also investigating the possibility of toxicity of water or bacterial or viral infection in the matter.”

Sources said that a medical team has also collected samples of water from the lake so that they can find out if there was something in water which claimed the lives of these birds.

Meanwhile, the officials buried the bird carcasses in a ditch. While a total of 669 dead birds were buried, many others were left unattended as it was difficult for the forest department personnel to go into the slippery muddy areas to retrieve their carcasses.

This is the second incident of mysterious bird deaths in the state reported in a week, after 37 Demoiselle cranes were found dead in Jodhpur on last Thursday. Officials have sent their viscera too for investigation.