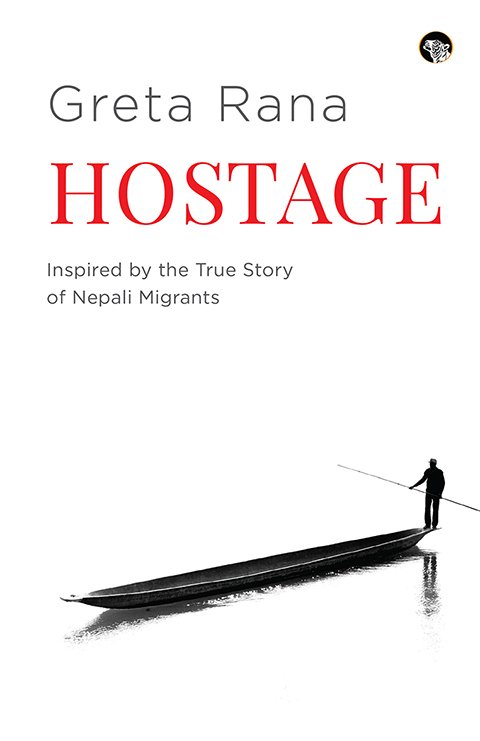 This novel by Greta Rana is inspired by a true story of Nepali migrants. She dedicated it to 12 Nepali migrants who were murdered in Iraq on August 20, 2004. It’s a gripping account of the struggle and sacrifices of a boatman for his family and how he, along with 12 others, end up in Iraq and is killed by those who mistook poverty for ambition.

It’s not just the story of a man who leaves for distant lands to enable a better life for his wife and children, but of thousands of others who flee the social and political upheaval of their countries in search of employment.

The novel highlights how the socio-political and economic conditions at the height of the Maoist movement in the hill nation forced many to search for a better life abroad and how corrupt politicians made money out of their plight.

The book, while referring to the brutality with which the terrorists in Iraq slew their hostages, brings home the point that there is no difference between the acts of these terrorists and the Maoists in Nepal. The author is equally harsh on the political corruption and the violation of human rights by the Nepalese government, police and the army.

Hari Prasad, a boatman living by the banks of the Rapti in the plains of Nepal, worked in a desert near Dubai for five years. He pays off his loans, reclaims his ancestral land and puts his children through school. But when he returns home, he witnesses the terror that has crept into Nepal’s everyday life.

Hari Prasad returns to the Gulf, this time to Jordan, for a higher-paying job — but not before sending his daughter and two sons to Khatmandu for further studies.

How the Jordanian and American firms take a group of Nepalis to a remote desert for work and how they get kidnapped by a terrorist group, who suspect them to be spying for the Americans, forms the climax of the story.

Hari Prasad becomes part of this group by quirk of fate as he boards the truck when a worker fails to turn up. As the names of only 12 hostages are announced to the world, Hari Prasad’s fate hangs in balance.

The terrorists behead one hostage and shoot 11 others in the head and videograph it to send their message across. While the whole world watches the execution of the 12, Hari Prasad falls to the bullets of a terrorist in a cave but not in front of the camera.

A letter which Hari Prasad manages to slip out through a “messenger” before his execution reaches a lawyer, Hassan, who reveals to the world that there was a 13th hostage who was also killed by the terrorists.

The lawyer takes up the case of Hari Prasad to seek compensation from his employers. He uses the services of Arjun, a Nepali working as driver of his friend, and another lawyer, Fayed.

Arjun lands in Nepal to trace Hari Prasad’s family, pursues a law course at the instance of his employer and falls in love with Hari Prasad’s daughter, also a student of law.

The novel is also about the tussle in Hassan’s family over his younger brother Ali joining the terrorists and the dilemma he faces when Ali comes out as a witness.

One of the characters in the novel is Siva Bahadur, a Maoist who works at the house of a minister. An engineer, Siva like many Nepali youngsters, joins the Maoists.

One of the characters says these young men were indoctrinated with hatred and killed many of their own countrymen. The police and the army too were indoctrinated with a kind of righteousness that led to fascism. “Left wing, right wing it made no difference. It led to same inhuman behaviour, same lack of respect for human rights and life,” says Siva. (IANS)