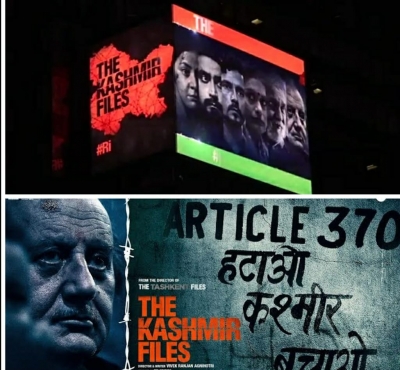 Vivek took to his social media on Thursday to share the news with his followers. He tweeted a video capturing the film’s digital poster at the ‘Times Square’ tower. He wrote, “HISTORIC. #TheKashmirFiles at Times Square, Manhattan. A matter of honour and pride as for the first time any film has been advertised at the world’s most expensive site by the fans and supporters led by @kp_global”.

The film is a true story and has been made based on documented footage and video interviews of the first generation victims of the genocide of Kashmiri Pandit community, which lead to the mass exodus of the community from the state.

The director further said in the statement, “But the fans and supporters of this film decided that they must advertise it on Times Square – World’s most expensive and prestigious advertising site and they raised their own funds and did it, led by global Kashmiri pandits diaspora.”

“It’s a matter of honour and pride for India and every single Indian because the issue of Kashmir genocide is now being mainstreamed just by the fans and supporters,” he concluded.

Both Vivek and his actor wife Pallavi Joshi were stationed in the US for over a month-long schedule for the special screenings of aThe Kashmir Files’ across different cities.