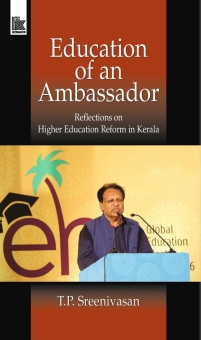 Reforms anywhere face resistance. This will be severe in a system where there are multiple forces opposing any change to the status quo and there are ideological conflicts.

This book captures the saga of resistance diplomat-turned-educator T.P. Sreenivasan had to face in his attempts to introduce reforms in the higher education space in Kerala, the state with 100 per cent literacy.

The retired Indian Foreign Service (IFS) officer has penned his experiences as the Vice Chairman of the Kerala State Higher Education Council (KSHEC) during 2011-16. Two years after laying down office, he has given a detailed account of the reforms initiated by the council under his leadership and the opposition they had to face from a wide variety of players, ranging from lethargic and egoist bureaucrats to forces playing petty politics.

N.R. Madhava Menon, Chancellor, National University of Educational Planning and Administration, in his foreword, has described the book as a revealing document on what keeps higher education in Kerala regressive while talented youth migrate in large numbers to institutions outside the state for higher studies.

He notes that there is not only opposition to reforms on ideological grounds but teachers, students and even the ministerial staff of colleges and universities are unionised on the basis of their political affiliations.

“My experience was an eye-opener to the higher education system in Kerala, the bureaucracy at different levels and the strengths and weaknesses of the state. It convinced me that Kerala can realise its full potential only if fundamental changes are made in the mindset, outlook, work culture and ethics of its people,” Sreenivasan writes while summing up his experiences.

The council, under his leadership, submitted as many as 16 reports to the government, laying out a roadmap for reform, touching upon the most crucial areas such as infrastructure, teachers’ training, technology-based education, autonomy, research and internationalisation.

“It is unfortunate that most of our recommendations have remained unimplemented. Proposals like allowing the operation of private universities in Kerala and cooperation with foreign universities were countered on ideological grounds. The reports were not studied or processed for decisions by the government on account of general lethargy and turf battles.”

Sreenivasan believes that higher education has changed globally in the last 10 years rather than in the previous 100 years. “Unless we catch up with these changes and reform the way we teach and learn, we will be unable to make use of the opportunities and meet the challenges of the 21st century,” writes the former diplomat, who had set the goal of ‘Higher Education 2.0’ for the state.

He considers creating of awareness of the need to bring about major changes in education was the most significant achievement of the council during his tenure.

While explaining the logic of the measures recommended by the council and the benefits that are likely to accrue if they are implemented, he highlights the unfinished business of reform and stresses the need for recommendations to be examined by the government.

“Kerala seems to lack the mindset to change and the money to invest in education. Some champions of change in all areas oppose change in education. Absence of a prosperous private sector is also a handicap,” he writes.

He notes that as an advisory body, KSHEC was at the mercy of the Department of Higher Education, which has its own priorities.

“The very authorities who entrusted me with the responsibility of running the system lacked energy and enthusiasm and were concerned only about protecting their own interests. They had no hesitation in countering new ideas, delaying action and conspiring against change,” is how the reformer expresses his frustration.

The author notes that the proposal for permitting private universities got highly politicised even when a committee set up by the council was studying the issue. He recalls that then Education Minister P.K. Abdu Rabb opposed the private universities even as then Chief Minister Oommen Chandy suggested that the committee’s report be discussed by the cabinet and an all-party meeting.

Sreenivasan mentions how the recommendation for an Arabic University was opposed by some who argued that it would be a nest of terrorists. “I pointed out that Islamic Centres functioned around the world in cities like Washington and that it would be wrong to identify terrorism with a language or religion.”

He writes at length about the incident of January 29, 2016, when he was attacked during a student demonstration near the venue of Global Education Meet. He observes that those who wanted to deny the credit of higher education reform to the Congress-led United Democratic Front government used the internationalisation agenda to demonise the Global Meet as a conspiracy to smuggle in private and foreign universities.

Is anyone listening? (IANS)