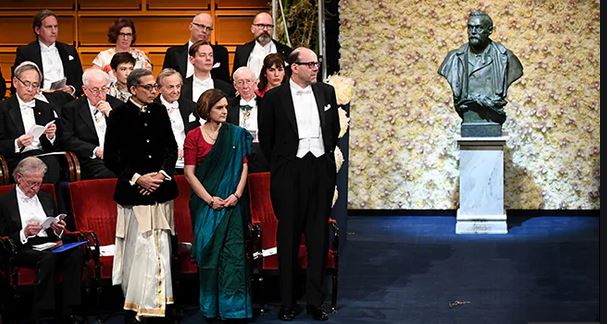 Abhijit Banerjee and his wife Esther Duflo, who received the Nobel Prize in economics — the 2019 Sveriges Riksbank Prize in Economic Sciences in Memory of Alfred Nobel — at a ceremony in Stockholm on Tuesday, wrote ‘Good Economics for Hard Times: Better Answers to Our Biggest Problems’, focusing on jobs, immigrants, growth, climate change and trade. Here are exclusive excerpts from the book, published with permission from the publishers, Juggernaut.

Two economic historians at Chicago’s Northwestern University are at the centre of this discussion.

Robert Gordon takes the view that the era of high growth is unlikely to come back. We have only met Gordon once. He gives the appearance of being quite reserved; his book, however, is anything but. On the other side is Joel Mokyr, whom we know much better, an enormously vivacious man, with twinkling eyes and a kind word for everybody; he writes with infectious energy consistent with his generally positive outlook on the future.

Gordon has gone out on a limb and predicted economic growth will average a meager 0.8 per cent per year over the next twenty-five years. “Everywhere I look,” he said during a debate with Mokyr, “I see things standing still. I see offices running desktop computers and software much as they did ten or fifteen years ago. I see retail stores

where we are checking out with bar code scanners the same way we did before; shelves are still stocked by humans, not by robots; we still have people slicing meat and cheese behind the counter.”

Today’s inventions, in his view, are simply not as radical as electricity and the internal combustion engine were. Gordon’s book is particularly daring. He gleefully takes on the set of future innovations futurologists predict and one by one explains why, in his opinion, none of them would be as transformational as the elevator or air conditioning, and why none would take us back to an era of fast growth.

Robots cannot fold laundry. Three dimensional (3D) printing won’t affect large-scale manufacturing. Artificial intelligence and machine learning are “nothingnew.” They have been around at least since 2004 and have done nothing for growth. And so on.

It is clear of course that nothing Gordon says precludes the possibility that something entirely unexpected, perhaps some hitherto unimagined combination of familiar ingredients, will prove to be ransformative. It is just his hunch that it won’t.

Mokyr, on the other hand, sees a bright future for economic growth, spurred by nations competing to be the leader in science and technology, and the resulting rapid spread of innovation worldwide. He sees the potential for progress in laser technology, medical science, genetic engineering, and 3D printing.

To Gordon’s claim that nothing much changed in fundamental ways in how we produced in the last few decades, he counters: “The tools we have today make anything that we had even in 1950 look like clumsy toys by comparison.”

But mostly, Mokyr thinks that the way the world economy has changed and globalized produces the right environment for innovations to bloom and change the world, in ways we cannot even begin to envision. He predicts one factor that will accelerate growth: we will be able to slow down the aging of the brain. Which of course would give us more time to have better ideas. Mokyr, engaging and creative as ever at seventy-two, is a good example for his thesis.

The fact that two brilliant minds come to such radically different conclusions about growth highlights what a vexing topic it has been. Of all the things economists have tried (and mostly failed) to predict, growth is one area where we have been particularly pathetic. To name just one example, in 1938, just as the US economy was going back into high-growth mode after the Great Depression, Alvin Hansen (who was not a nobody; he was the co-inventor of the ISLM model most students of economics will remember from their first macroeconomics class, and a professor at Harvard) coined the term secular stagnation to describe the state of the economy at the time.

His view was that the American economy would never grow again because all the ingredients of growth had already played out. Technological progress and population growth in particular were over, he thought.

Most of us today who grew up in the West grew up with fast growth or with parents used to fast growth. Robert Gordon reminds us of our longer history. It is the 150 years between 1820 and 1970 that wereexceptional, not the period of lower growth that followed. Sustained growth was virtually unknown until the 1820s in the West.

Of course, the fact that sustained growth over a long time, the kind we saw over most of the twentieth century, was unprecedented, does not mean it could not happen again. The world is richer and better educated than ever before, the incentives for innovation are at an all-time high, and the list of countries that could lead a new innovation boom is expanding.

It could well be the case, as some technology enthusiasts believe, that growth explodes again in the next few years, fueled by a fourth industrial revolution, perhaps powered by intelligent machines capable of teaching themselves to write better legal briefs and make better jokes than humans. But it could also be, as Gordon believes, that electricity and the combustion engine brought about a onetime shift in how much we can produce and consume.

It took us some time to reach this new plateau and there was fast growth along the way, but we have no particular reason to expect this episode will repeat itself. Nor, we might add, do we have definitive proof it won’t. Mostly, what is clear is that we don’t know and have no way to find out other than by waiting. (IANS)