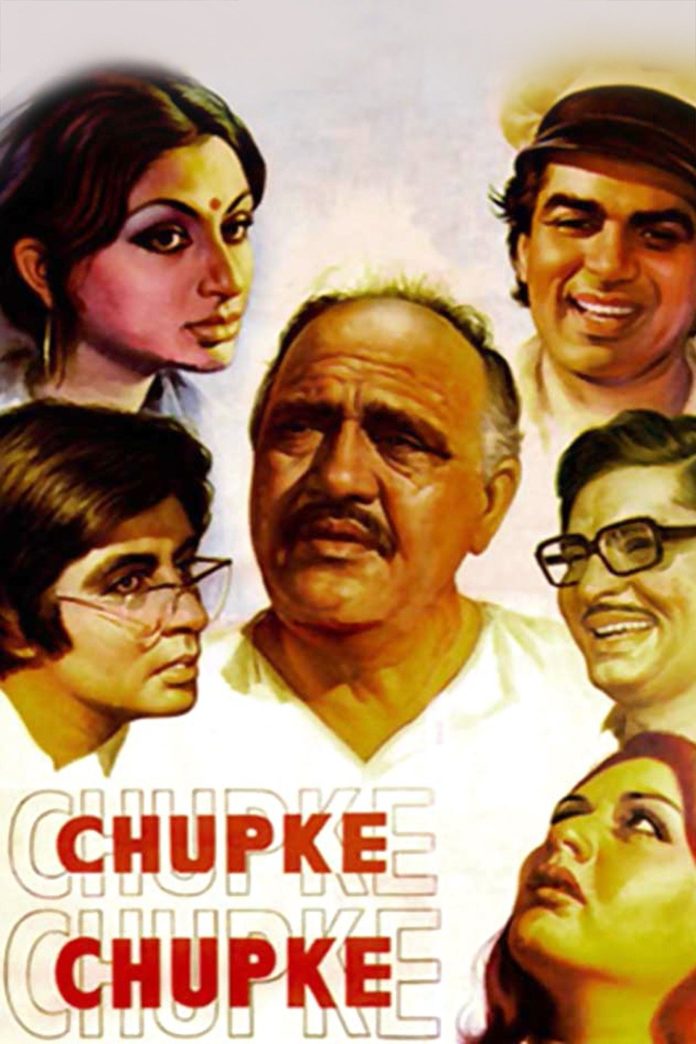 New Delhi– While we get to watch new films all the time, the lockdown could be a golden chance to catch up with a few classics across genres. Digital platforms are overflowing with them, and you would literally be spoilt for choice selecting some really enjoyable stuff that has come out of Bollywood over the decades. Twenty-one days, it would seem, is too short a time to catch up with what really defines vintage Bollywood and is available in the OTT libraries.

IANS picks a few old films that you might want to revisit, that will let you relax and bust the stress of lockdown. Of course, this is not a definitive list.

Directed by Hrishikesh Mukherjee, the comedy film is about a man pretending to be a driver and fooling his wife’s brother-in-law as an attempt to prove that the brother-in-law is not as smart as he claims to be. The film stars Dharmendra, Sharmila Tagore, Amitabh Bachchan, Jaya Bachchan and Om Prakash. It is available on Netflix.

The comedy-drama, directed by Rajkumar Hirani, is about a goon who sets out to fulfill his father’s dream of becoming a doctor. It stars Sanjay Dutt, Gracy Singh, Arshad Warsi, late Sunil Dutt and Boman Irani. It is available on Netflix.

The Manmohan Desai multistarrer is widely considered one of the best examples of Bollywood masala entertainment ever. It was Amitabh Bachchan’s first major foray into a brand of comedy for the mass. Big B tickled the funny bone with his role of Anthony Gonsalves. The film had a lasting impact on pop culture, with Laxmikant-Pyarelal’s distinct score, the dramatic one-liners, colourful characters and a peculiar mix of slapstick and melodrama. It is available on Netflix.

The iconic film, starring Dimple Kapadia, Rishi Kapoor, Pran, and Prem Nath, is considered a classic in Indian cinema. It is about Raja, an 18-year-old son of a rich Hindu businessman, who falls in love with 16-year-old Bobby, a Catholic belonging to a very different stature. It is available on Netflix.

The Hrishikesh Mukherji gem is one of the greatest mainstream comedies that Bollywood has ever made. Featuring Utpal Dutt in what has to be his defining comic role, the film stars Amol Palekar and Bindiya Goswami, in a merry story of confusion, triggered off by a man who, under circumstances, has to pretend that he has a wayward and ill-mannered twin brother. The film is available on Netflix. The idea inspired Rohit Shetty’s 2012 hit “Bol Bachchan”.

The film narrates adventures of two young broke men who discover that a stunning heiress lives nearby and tries to charm her. It stars Aamir Khan, Salman Khan, Raveena Tandon, Karisma Kapoor, Paresh Rawal and Shakti Kapoor. It is available on Amazon Prime Video and Netflix.

Starring Shah Rukh Khan, Suchitra Krishnamoorthi and Deepak Tijori, the film is about a boy who falls for a girl who is in love with someone else and tries to create a rift between her and the man she loves. It is available on Netflix.

Watch the iconic Raj and Simran’s story come alive once again.The Shah Rukh Khan and Kajol starrer follows the romance of two NRIs who despite being madly in love refuse to elope. It is remembered for its plot, dialogues and soulful music. The film, available on Amazon Prime Video, also turned out to be a launchpad for Shah Rukh as the king of romance in the Indian film industry.

The romantic drama is about a young man Viren (Anil Kapoor) falling in love with an older woman, Pallavi (late Sridevi) — who goes onto marry her love. However, a tragic accident kills Pallavi and her husband, orphaning their baby girl, Pooja. Pooja grows up to be a splitting image of her mother. It is about how she falls in love with a now older Viren. The Yash Chopra directorial is available on Amazon Prime Video.

The musical directed by Sooraj Barjatya holds a special place in the hearts of many who grew up in the 1990s. It re-defined friendship and romance in Bollywood. Directed by Sooraj Barjatya, the film traces Prem (Salman Khan) and Suman (Bhagyashree)’s love story hindered by family dispute and financial differences. It is available on Amazon Prime Video.

Priyadarshan’s madcap misadventure starring Akshay Kumar, Paresh Rawal, Suniel Shetty and Tabu narrates the story of three impoverished men who become rich by the end of the tale thanks to a freakish stroke of luck and a kidnapping plan gone wrong. One of the most hilarious films ever made in Hindia, it is available on Amazon Prime video.

The epic historical drama film, directed by K. Asif, tells a love story between Mughal prince Salim and Anarkali, a court dancer. Salim’s father and emperor Akbar, disapproves of the relationship, which leads to a war between father and son. The classic film features Madhubala, Dilip Kumar and Prithviraj Kapoor. Re-visit it on Amazon Prime Video.

A remake of Hollywood movie “French Kiss”, “Pyaar To Hona Hi Tha” stars Kajol and Ajay Devgn. The film, available on Hotstar, is about a couple finding love while pursuing different goals.

Starring Aamir Khan, Ajay Devgn, Juhi Chawla and Kajol, the film tells a love story of two couples when they are met with oppression by their parents, society and their class. It is available on Hotstar.

The classic comedy film is about two pairs of identical twins, who are separated at birth and meet in adulthood. What follows is confusion, more confusion and funny twists. The film features Sanjeev Kumar, Deven Verma, Moushumi Chatterjee and Deepti Naval. It is available on Hotstar.

Starring Govinda, Raveena Tandon, Kader Khan and Harish Kumar, the film narrates comical situations when Gopi (Govinda) dresses up as aunt to solve problems of his friends. He gets into a funny situation where he must avoid two suitors trying to woo the aunt. It is available on Hotstar. (IANS)