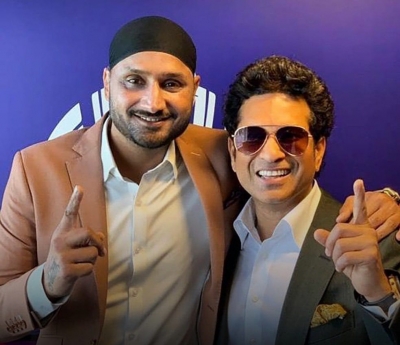 New Delhi– Legendary Sachin Tendulkar led the cricket fraternity in pouring best wishes to off-spinner Harbhajan Singh, who announced his retirement from all forms of cricket on Friday.

The Master Blaster wrote a profound message for the spinner, saying he will never be able to forget the memories he created on the field.

Tendulkar said he can’t forget the memories that the two of them created when playing for the senior national team together.

“What a wonderful and fulfilling career, Bhajji! I first met you at India nets in ’95-over the years, we have been part of wonderful memories. You have been a great team man, playing with all your heart,” Tendulkar wrote in a Twitter post.

“Both on the field and off it- it is always fun to have you as a part of any team. I cannot forget all the moments of laughter. You have done your best for India in your long career, we are all very proud of you. Wishing you happiness and success in the ‘doosra’ phase of your career,” he said.

Former India cricketer Anil Kumble, who is the highest wicket-taker for India, also wished Harbhajan for his tremendous career.

“Congratulations Bhajji on a great career. It was wonderful to bowl alongside you. Created a lot of good memories on the field. Have a fantastic second innings partner. Best wishes to you and family,” Kumble wrote on Twitter.

Former India pacer, S Sreeshath with whom Harbhajan had a bitter fight after an IPL match in 2008, labelled the spinner as the best in the world.

“@harbhajan_singh Ur gonna be the one of the best ever played cricket not just for India but in world of cricket..it’s a huge honour to know u and to have played with you bhajjipa. will always cherish the lovely hugs (lucky for me) before my spells) lots of love and respect.”

“Congratulations on a wonderful career Pajhi Your contribution to cricket has been immense and it was a pleasure to play alongside you. Enjoyed our great moments together on and off the field. Wishing you luck for your next innings @harbhajan_singh,” India opener Shikhar Dhawan tweeted.

“Hearty congratulations to my great mate @harbhajan_singh on a remarkable career! A tremendous exponent of off-spin, a gifted batsman, and a true competitor who fashioned many a wonderful Indian victory. Best wishes for the future, Bhajji, go well!”

Former India player Suresh Raina shared his emotion on Twitter, saying, “Your contribution to Indian cricket will always be cherished, @harbhajan_singh paaji wishing you all the best for your future.”

Left-arm spinner Kuldip Yadav wished Harbhajan on Koo, “A legend of the game and a match-winner for our country, Thank you Harbhajan Paaji for your guidance and helping me with my game. You will be missed. Best wishes.”

The 41-year old represented India in 103 Tests, 236 ODIs, and 28 T20Is, picking up 417, 269, and 25 wickets respectively. His overall tally of 707 international wickets is the second-highest for India, behind Anil Kumble’s 953. He was also a handy contributor with the bat, scoring 3,569 runs with two centuries and nine fifties.

Harbhajan, who became the first Indian to take a hat-trick in Test cricket — against Australia at Eden Gardens in 2001 — took to social media to announce his retirement. (IANS)