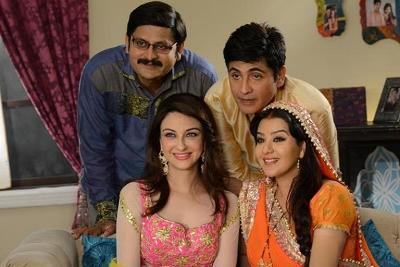 New Delhi– For some, Holi is all about “gujiya and gulaal”, and for others, it’s incomplete without a dose of “bhang”. TV celebrities like Nehha Pendse, Vaishali Thakkar, Vikkas Manaktala and Saumya Tandon have interesting anecdotes to share on their experience of “bhang ke side effects” during the festival of colours.

As India gears up to celebrate Holi on Monday, IANS got in touch with various TV celebs to find out whether their memories of “bhang” — an edible form of cannabis — have been memorable or nightmarish.

Actor Sandeep Anand, who hails from Ujjain and features in “May I Come In Madam?”, says he has always considered bhang as “prasad”.

“I am from Ujjain, which is the land of the Mahakali temple, and here, as ‘prasad’, you get bhang. Once my friends gave me ‘thandai’ (a drink) which had bhang mixed in it and I had a very bad experience. For three to four days, I had a very bad hangover and I felt like everything around me was moving,” Sandeep recounted.

Actress Saumya Tandon from “Bhabhi Ji Ghar Par Hain” has never consumed bhang herself but says it had turned her into a chauffeur for her friends once.

“I have seen my friends have bhang and behave in a funny way. I have always carried my friends back home safely, so I was the chauffeur for everyone — dropping them home after a Holi party,” said Saumya, who remembers how one of her friends even cried for eight hours thanks to bhang.

“It was actually quiet a scary sight. But, yes, if you see me on the dance floor, I dance as if I am drunk or have had bhang. Everyone tells me, ‘You don’t need bhang, you are anyway wild on the dance floor’,” she quipped.

“Brahmarakshas” actor Parag Tyagi says he once saw a person who, after consuming bhang, started worshiping a cycle.

“I belong to North India and having bhang there during Holi is very common. I still remember when a guy had bhang and put his cycle on the roof and started worshipping the cycle. It was a very funny scene,” he said.

Talking about his own experience, he said: “After having bhang, the only thing which I did was sleep and eat. I used to sleep for two hours, get up, have food and go back to sleep again. This happened for almost 12 hours.”

“I had bhang three years back. I gulped down around 12 glasses of ‘thandai’ that had bhang in it. After drinking 12 glasses, I was laughing and dancing all the time like a joker. My friends still make fun of me when they recollect the incident. Later, I remember going home and sleeping for 16 hours straight,” Param said.

However, something unusual happened with Aarti Singh, who is known as Amba of “Waaris”.

“I once had bhang when I was in my hometown during Holi. At first, nothing happened and I was like, ‘Okay, this is not as bad as I thought’. But then after that, I got so high that it ended up with me in the hospital,” Aarti said, without giving out much about what exactly happened.

Actress Roop Durgapal recounts she had tasted bhang during her college days.

“Once in college, I had bhang in my hostel room. A senior had mixed it with milk and told me to gulp it down. It was a bit heady, and later we all were dancing. Next, I only remember waking up next morning,” she said.

Vikkas Manaktala, known best for his role in “Left Right Left”, says nothing happens to him after having bhang.

“Every time I have had bhang, there has been no buzz. I have been as normal as I was before having it. And I am talking about having at least four to five litres of it,” Vikkas said.

While “May I Come In Madam?” actress Nehha Pendse hasn’t tried bhang even once in her life, she still has a funny moment to share.

She said: “I have never tried bhang and I don’t mind trying it once in my life. Once we were shooting for a sequence of Holi and one of my co-stars had a glass of milk, but started acting as if he had Bhang and pulled everyone’s leg.” (IANS)