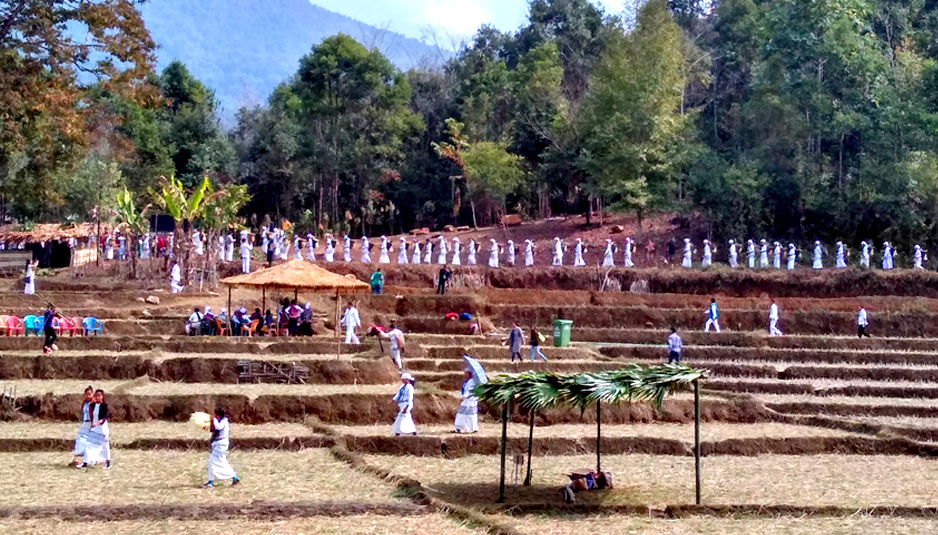 Basar — Starting with the locally-famous “achin pinam” (spiced rice) to smoked beef platters, or the “amin” made out of rice cake and chicken, every dish cooked in Arunachal Pradesh’s Basar town gives out a flavour of the hills and wilderness that surrounds the place.

The quaint hill town at the centre of the northeastern state, which boasts a breathtaking natural backdrop, also entertains its visitors with a rich culinary experience — and to top it all, the food cooked in bamboo containers and served on plates made out of local leaves, surely gives urban gastronomes a taste of uniqueness.

Locally grown rice — boiled with herbs — garden fresh vegetables and boiled fish caught from the streams also regularly feature on the menu. Anyone feeling thirsty after walking through the serpentine roads can feel rejuvenated by sipping the Apong rice beer, served in exquisitely-made bamboo containers.

“Beef is our main non-vegetarian platter. Everyone in the village has Mituns (a unique bovine species) and we use that as our main source of meat. The beef is cut into small pieces and grilled on sharp bamboo sticks (skewers) both as a starter and the main course,” local resident Bekar Basar told this visting IANS correspondent.

“We have pork too. Roasted and grilled pork is a delicacy here. However, hunting deer or other wild animals is banned in the region,” he said.

According to locals, the meat recipes are mostly served dry. The use of spice is limited to local herbs and unlike the dishes from other parts of India, the food here does not consist of any gravy.

Rice, being the staple in the region, has its presence in a majority of the main course dishes. Apart from the simple boiled rice, the local platter also consists of achin pinam, in which the rice is mixed with okko leaves and cooked on a high flame inside a bamboo container.

While most of the non-vegetarian cuisine is centred on beef, bamboo, which grows in abundance in the region, plays a significant part in the vegetarian dishes. Soup is made out of bamboo shoots while epa, or bamboo sprout powder, is used as a spice for various dishes. The powder is often mixed with water to create a paste known as eku and added to dishes like boiled fish for a distinct taste.

Vegetarians coming to Basar can also indulge in dishes like oik, a platter made out of leaves boiled with spices, and raro — a unique vegetable dish that first originated from the Galo tribes.

“Among all the dishes we have, I like amin the most. It is a dish where rice cakes are added with tiny pieces of chicken and stirred heavily in boiled water until it is fully mixed. A touch of pepper is added before serving. The dish has a distinct taste and is generally served after the main course,” a woman shopkeeper said with a smile, otherwise friendly, but who declined to give her name to a stranger.

After pampering the taste buds with the wide variety of food, one can take a sip of Apong to feel refreshed. Apong is made in almost every household in Basar and is a local favourite, much like in the rest of the northeast. The dark coloured drink with a sweet, malty taste is a total delight for beer lovers.

“First the rice husk is roasted till it turns black. Then the rice is mixed and kept in the open for nearly two weeks for fermentation. This is then mixed with water and brewed in a conical-shaped bamboo container and served in bamboo glasses,” Marto Amo, a Galo youth who often makes Apong at home, explained.

There are two variations. The stronger brew is called poda, while the relatively lighter one is called pori.

“In Basar, everyone drinks Apong. It is not highly intoxicating but relaxes you after a hard day’s work. We drink it almost every day after work or while partying,” he added with a smile.