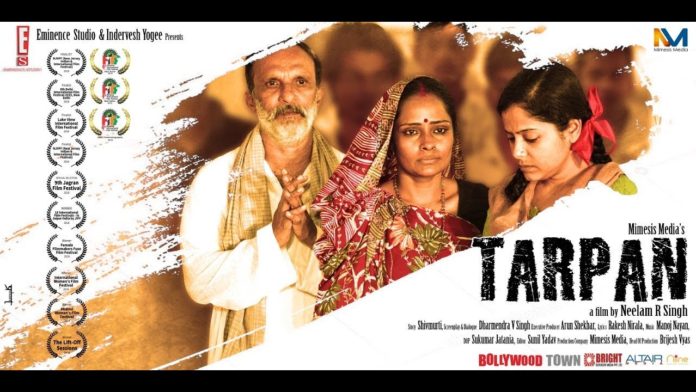 Debutante Director Neelam R. Singh’s film Tarpan is an adaptation of contemporary author Shivmurti’s novel, of the same name. Shivmurti’s work depicts the sufferings, predicaments and exhortation of the rural folk, peasants, labourers, the women and the oppressed of Northern India.

The title, “Tarpan”, which is used as a metaphor, means the ritual of purification, to attain salvation from the sins committed by one’s ancestors. Since the caste system in India, is a legacy handed over by karma, the ones lower down the caste rung consider themselves burdened by the sins of their ancestors.

The introductory scene is a good table-setter; things just sort of happen to Rajpatiya (Neelam) a young lass from the down-trodden sect who strays into the sugarcane field of the upper-caste Chandar (Abhishek Madarecha). On being caught for trespassing, she is abused and man-handled and is rescued by her folks in the nick of time. But soon, the incident in the guise of honour (caste-politics), is blown out of proposition by the local Dalit politician Bhaiji (Sanjay Kumar) who exploits the situation. How he manipulates Rajatiya and her family which includes; her father Pyare (Nand Kishore Pant), mother (Poonam Alok Ingle) and her brother, to seek revenge, forms the crux of the narrative.

On the performance front, every actor is effortless. They try to get into the skin of their characters, but at times they tilt the balance to the extent of being over the top and dramatic. But nevertheless they draw you into their lives with aplomb.

Set in Salarpur in Uttar Pradesh, the film is shot on real locales and captures the heart of rural India in the most simplistic and realistic manner. Though astutely mounted, the treatment and the pace of the narrative at times appear cliched and thus tends to be boring.

The mediocre technical and production values are in sync with the overall flavour of this low-budget film. The music though seamlessly integrated into the narrative at times sound forced.

Overall, the film without giving any solutions, mirrors the cold-truth of today’s society and despite all its short-comings, appears as a sincere attempt. (IANS)