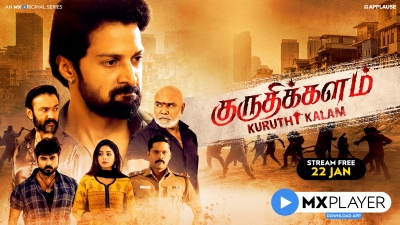 Chennai– Filmmaker P Rajapandi says his upcoming Tamil crime drama, Kuruthi Kalam, will depict a range of emotions, from revenge to sacrifice. Directed by Rajapandi and Danush, the web show is set against the fictional backdrop of brutal gang wars in Chennai.

“Crime dramas are a genre that audiences are loving these days and this web series depicts a wide range of emotions – from revenge, to betrayal, and sacrifice – it has an essence of all things entertainment,” Rajapandi said.

Danush added: “It’s a binge-watch kind of format and I am grateful to all the cast and crew who have so beautifully managed to pack all this action and drama into the 13-episode show.”

The show revolves around rival gangs with a history of violence. There is an upright youngster Vijay (played by Santhosh Prathap) is pulled into power play, and has to give up his hopes of becoming a police officer. As he rises in stature, he is pitted against his enemies, which include his once-best-friend Kumar (essayed by Ashok Kumar), and sub inspector Arun (played by Soundara Raja).