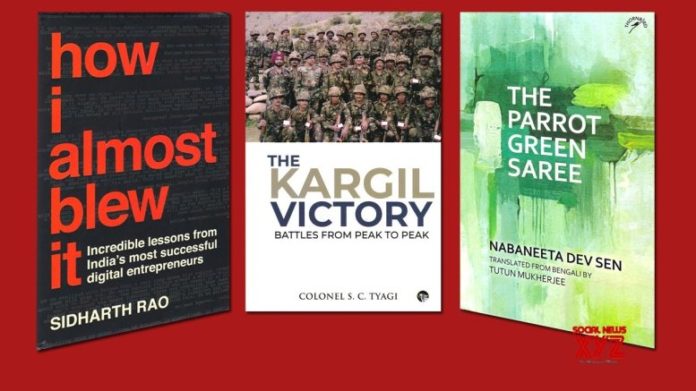 New Delhi– Read about the diehards in the e-commerce space who refused to give up even as the world was crashing around them; next, relive the battles of the Kargil war that gave new meaning to the concept of grit and determination; and finally, look at political issues through a turbulent mother-daughter relationship.

There’s much food for thought the IANS Bookshelf has to offer this weekend. Time to sharpen your knowledge!

Most revolutionary entrepreneurs ran back to the hills and never came back after the dot-com crash of 2000. “But the few who stuck their necks made terrific comebacks four to five years later when, fuelled by a new optimism, venture capital firms started setting-up in India again,” Rao, himself an angel investor and co-founder of Webchutney, now rechristened Dentsu Webchutney, writes.

“The hundreds of millions of dollars that were pouring in turned almost every high-net-worth individual into an ‘angel’. Youngsters – as fresh as hot bricks from a kiln – were raising money from investors who had missed the bus earlier,” Rao adds.

What makes this book a standout is that it is a clinical account of the various battles that took place between May 3 and July 26, 1999, as the Indian Army moved to evict Pakistani soldiers disguised as militants who had occupied the icy heights along the Line of Control in the Kargil sector of Jammu and Kashmir.

The Himalayan showdown is brought alive through the words of a veteran Indian Army officer who was present throughout the conflict and recounts both his own experiences and the stories of the heroic soldiers who fought and won fierce battles from one peak to another.

“There are many stories of bravery and courage from the war but it is not easy to compile all of them in just one book. After a period of two decades, the present younger generation needs to be reminded of the tales of bravery of the warriors in Kargil to inspire and motivate them. This account of the Kargil war is an effort towards that direction,” Colonel Tyagi writes.

The works of Nabaneeta Dev Sen, one of the prominent Bengali litterateurs of our times with more than 80 books to her name, reflect her intellection on an amazing array of social, political and psychological topics under different genres.

This is more than evident in “The Parrot Green Sari”, the last of her Naxal triology after “I, Anupam” and “In a Foreign Land, By Chance”.

It’s the story of two women, two generations and two worlds moulded out of memory, expectations and desire. Set primarily in the US, it is also the story of displacement and loss, of a remembered homeland, of political and personal battles, of individual freedom – and about rebirth. At the bottom line, can the mother-daughter duo ever be friends?