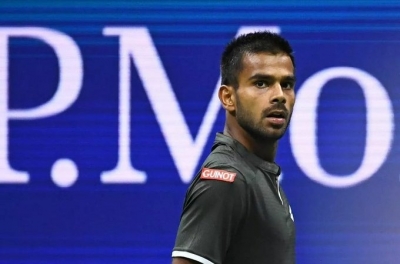 New Delhi– Sumit Nagal has been dropped from the five-member Indian Davis Cup team for the World Group 1 play-off against Denmark, the All India Tennis Association (AITA) said on Wednesday.

The tie will be held at the grass courts of Delhi Gymkhana Club on March 4 and March 5 inside a bio-security bubble. World number 222 Nagal made way for Yuki Bhambri (863) in the Indian squad as the latter is precisely comfortable playing on grass courts.

The other members Ramkumar Ramanathan (182), Prajnesh Gunneswaran (228), doubles specialist Rohan Bopanna and Divij Sharan, are included while Saketh Myneni and Digvijay Pratap Singh are the two reserve players in the squad, AITA said.

The team was picked after a virtual meeting of the Professional Selection Committee of AITA on January 29. According to a statement issued by AITA, the meeting was attended by chairman Nandan Bal, members Balram Singh, Mustafa Ghouse, Sai Jayalakshmy, Rajpal, Zeeshan Ali and AITA secretary general Anil Dhupar.

It was decided in the meeting that the team will assemble in New Delhi on February 23 for the tie against Denmark. (IANS)