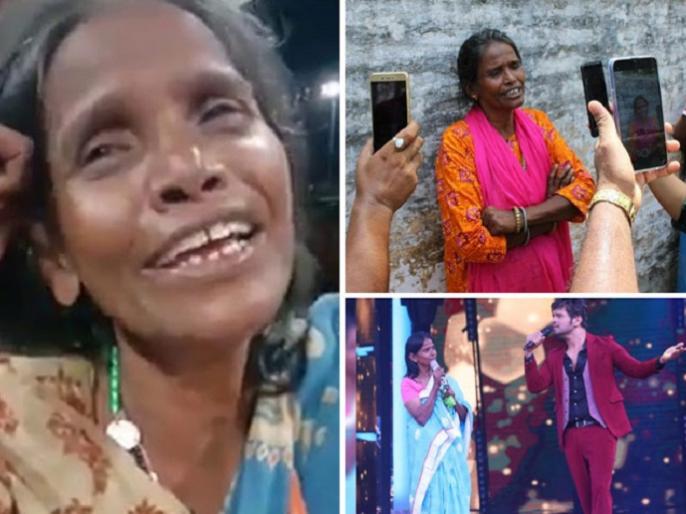 New Delhi–About 60 years ago, she was born into a well-to-do family. Unfortunately, she got separated from her parents. Later, her marriage to a cook of late Bollywood star Feroz Khan took her from West Bengal to Mumbai. Then “cracks” in her family emerged and her struggle for livelihood increased.

Cut to 2019, today she is the Ranaghat station singer Ranu Mondal, an Internet sensation and a budding Bollywood singer.

“My life story is a very long one. A film can be made out of my life story. It will be a special one,” Ranu told IANS from Mumbai where she just had a Facebook Live session with her growing fan base.

It was just a few weeks ago that a video featuring her, singing Lata Mangeshkar’s evergreen song “Ek Pyaar Ka Nagma Hai” on a railway platform, went viral online.

This caught the attention of many channels and music composers, including Himesh Reshammiya who offered to launch her in Bollywood as a playback singer. She has even recorded an episode for the reality show “Superstar Singer”.

She is getting a taste of stardom right now, but her life prior to the viral video was anything but a dreamy one.

“I wasn’t born on a footpath. I belonged to a well-to-do family but it was my destiny. I got separated from my parents when I was just six months old,” she recalled.

Her grandmother was there by her side, but life wasn’t easy.

“We had a house but you know you need people to maintain it. There were so many days of loneliness. I struggled a lot but always believed in God. I used to sing according to situations. It wasn’t to get singing opportunities, just for the love of singing,” said Ranu.

“I used to learn songs from Lata Mangeshkar. She didn’t teach me but I learnt from the radio and cassettes,” she recalled.

Years later, she walked down the aisle.

“We shifted from West Bengal to Mumbai after marriage. My husband worked at filmstar Feroz Khan’s house as a cook. His son Fardeen was in college that time.

“They used to treat us very well, like family members,” said Ranu.

She enjoyed her stay in Mumbai, watched new film releases like “Hero”, starring Jackie Shroff. Then “something broke in my family” and she headed back to her home state.

Back to present, she is all smiles, reunited with her daughter and waiting for her own Bollywood debut.

“I am very happy and feeling great. I have already recorded five to six songs. The thing is, music facilities in Mumbai mean a lot to me. They are important. To commute to and from my home to Mumbai on plane is also difficult. It would have been good had there been a house in Mumbai. But I don’t have to think about it. God is there,” she said.

There were reports about superstar Salman Khan gifting a flat to her.

“I haven’t met Salman till now. But his movie ‘Tere Naam’ is very good,” she said, denying getting any gift from him.

Thanks to her melodious voice and the Internet, she is getting a lot of offers from people. Now it’s up to her what she wants to do next.(IANS)