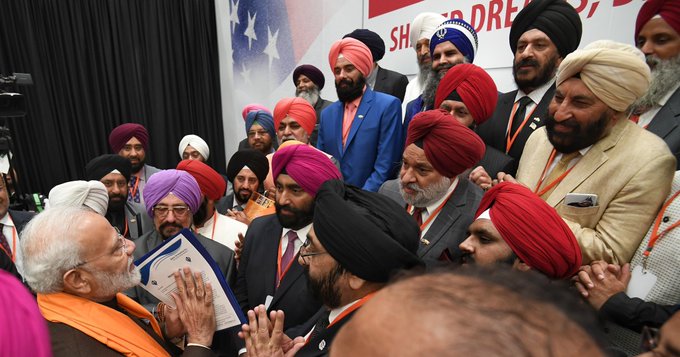 Houston–A delegation of Sikhs met Prime Minister Narendra Modi here on Saturday and thanked him for going ahead with the Kartarpur corridor, saying they were proud of him and fully backed him.

In his second engagement of the day after arriving in Houston, Modi met a delegation of Sikhs, Kashmiri Pandits and Dawoodi Bohras.

The 50-member Sikh delegation presented the Prime Minister with a ‘saropa’, and raised slogans of ‘Jo Bole So Nihal, Sat Sri Akal’. They also posed for a photo with Modi at the Post Oak Hotel, where the Prime Minister is staying.

“We are happy with Prime Minister Modi and that is why we are here. The credit for the Kartarpur corridor goes to Modi. We are very proud of him and want him to continue with his reform measures,” said a member of the Sikh delegation.

“Modiji, we are with you. We are proud to be Indian,” said another member.

The delegation also presented a memorandum to the Prime Minister.

“I had an excellent interaction with the Sikh community in Houston. I am delighted to see their passion towards India’s development,” Modi tweeted later.

The Sikh delegation also thanked Modi for removing the names of over 300 community members from blacklist.

The Indian government earlier removed from its blacklist the names of 312 Sikh foreign nationals involved in anti-India activities.

Ministry of External Affairs (MEA) spokesperson Raveesh Kumar said that the community members congratulated Modi on some of the path-breaking decisions taken by the Indian government.

A member of the delegation, Avinder Chawla, sitting Commissioner, Arvin, California, said that they had submitted a memorandum to the Prime Minister and thanked him for what he has done for the Sikh community. He said the fact that US President Donald Trump is joining Modi at the ‘Howdy Modi’ event shows the importance of the Prime Minister’s leadership.

The meeting of the Sikh delegation came even as separatist Sikh groups and Pakistanis are to hold protests at Houston to coincide with the ‘Howdy Modi’ event on Sunday. (IANS)