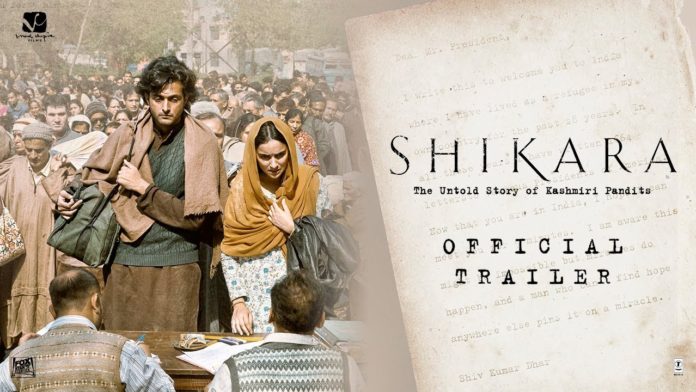 Jaipur– “For 70 years we had Article 370 in Kashmir. What good came out of it? Only a reign of terror? It has been only a few months that it has been abolished. Let’s wait and watch. I am hopeful that something will happen,” said filmmaker Vidhu Vinod Chopra.

As his latest film ‘Shikara’, which took 11 years in the making gets set to be released on Feb 7, the filmmaker, whose mother was forced to leave Kashmir stresses that the movie is an ode to all those Pandits who had to live in refugee camps after they were driven out of their homes in the Valley. “More than four lakh people have been living in refugee camps in Jammu. We are the people whose voice was not heard in Parliament; we are the ones who were not talked about in the media. I just hope that unlike 30 years back, mass media and Parliament now starts talking about us.”

Chopra, who attended the session ‘Shikara’ on the third day of Jaipur Literature Festival along with writer and journalist Rahul Pandita, who co-wrote the movie, recalled that he spent 20 days in a refugee camp in Jammu to film an eight-minute sequence of the night when the Pandits were forced out of their homes by the majority community in the state. “Women wore different clothes so as not to be recognised.” The refugees in the Jammu camp have played themselves in the film, which doesn’t have any junior ‘actors’. “Even in Schindler’s List, it was only during the end that Jews appear on the screen.”

Journalist and writer Rahul Pandita, author of ‘Our Moon Has Blood Clots’, a book on the exodus of Kashmiri Pandits, remembers the time when the media was busy writing about the Tibetan crisis even as the exodus unfolded. “It was ethnic cleansing. Thousands of people across the valley threw Molotov cocktails and stones at our homes. There were rallies all over Kashmir, with masses shouting ‘We will do anything for Islam’. It’s traumatic to recall how our own neighbours, friends and colleagues became collaborators.”

Though the official death figure of Pandits remains 700, the writer pointed that thousands died in refugee camps due to sunstroke, snakebites and the living conditions there. “Even thirty years later, the conditions in those camps have not improved.”

While Chopra grew up in a Kashmir that still had its secular credentials intact, Pandita, who was 15 years when tensions reached their peak, recalls, “The divide between the communities was clear. We would see youngsters from the majority community doing drills and practising martial arts. Of course, whenever India lost a cricket match, there was a Diwali in Kashmir.”

Insisting that the denial of what happened to them was even a bigger betrayal that the exodus itself, Pandita said, “We have seen ordinary people dancing around Pandits’ corpses.”

Clearing that he had been misquoted by a section of media, Chopra said, “I never said that those who killed our people can get away with an apology. Sadly, television tends to show only the sensational part.”

In ‘Shikara’, Chopra doesn’t show the face of those burning Pandit homes. Stressing that violence is always faceless, he said, “I don’t want to propagate hate. There is already too much of that around. It’s time to heal.”

Pandita said for reconciliation to take place, it was important that there is an acknowledgement of the fact that the majority community in the state kept silent in the face of atrocities committed on the Pandits. “Can you believe, there has not been any conviction for a single killing? This is despite the fact that in June 1990, someone like Bitta Karate openly admitted to killing Pandits on national television.” (IANS)