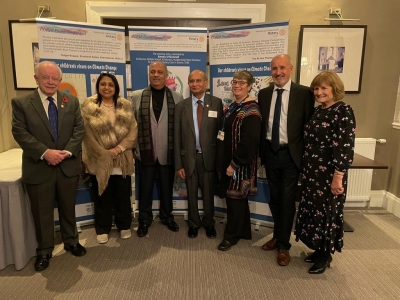 Glasgow–After the culmination of the pivotal two-week-long UN Climate Change Conference COP26, Rotary will convene its own summit in a week’s time in the Philippines with focus on “how we can battle climate change and help build local economies”.

Over the past five years, more $20 million in global grant funding has been allocated to environment-related causes by The Rotary Foundation through its support of community economic development and water, sanitation, and hygiene projects.

Talking to IANS on the penultimate day of COP26 where world leaders are hard at work on climate priorities — to keep global heating to 1.5 degrees Celsius, as required by the 2015 Paris Agreement, Rotary International President Shekhar Mehta said he had seen first-hand in the 2004 tsunami devastation that would have been lessened if mangroves had been preserved.

“One way that Rotary is taking significant action worldwide is by helping to regrow mangrove trees around the world,” he said.

“Mangrove trees are extremely important in protecting local ecosystems, first because they help protect against soil erosion. They also provide shelter and create a breeding environment for small fish and other sea creatures.

“And they help mitigate the effects of coastline erosion and rising CO2 levels,” said Mehta, who led a discussion on mangroves at COP26 on Wednesday.

He explained how the mangroves along the coasts are vital in the fight against climate change as they help capture greenhouse gases.

The mangrove population, he said, has declined and been destroyed by development all over the world — causing “alarm for those of us who recognize the massive benefits these trees provide for our habitats”.

The Rotaract Club of Malindi, a seaside town by the Indian Ocean in Kenya has planted more than 80,000 propagules and more than 50,000 seedlings in the past four years.

Likewise, the Rotary Club of Nassau, the capital and largest city of The Bahamas, has held regular mangrove clean ups to remove rocks, sediments and trash to improve the flow of water through the mangroves in New Province, Bahamas.

In Australia, the Redcliffe Sunrise Rotary Club has sponsored a mangrove conservation day at Moreton Bay Marine Park to raise awareness of how the public can help protect mangroves and what they can do to influence policymakers to adopt development plans that take the long-term preservation of these trees into account.

“These are just a few examples of the actions Rotary members are taking to protect these vital ecosystems. There are numerous other projects in the Philippines, American Samoa and the British Virgin Islands,” he said.

“All of these projects demonstrate Rotary’s long-term commitment to environmental sustainability,” he added.

After the tsunami in India, Mehta helped build nearly 500 homes for families affected by the disaster. He pioneered a programme that has performed more than 1,500 life-changing heart surgeries in South Asia. (IANS)