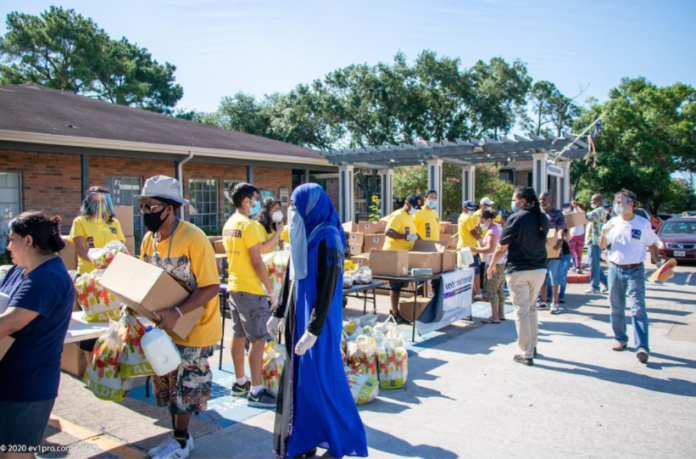 “Sewa organized 15 food drives in the past seven weeks in Houston’s various low-income neighborhoods and served more than 3,400 families by giving them food kits containing 30 pounds or more food. We are conducting our food drives in the apartment complexes where the most vulnerable communities live,” said Gitesh Desai, Sewa’s Houston Chapter President.

“Sewa is planning to have these drives every weekend for the next six weeks. On Saturday, June 27, food, and mask distributions are planned from 10 to 11 AM in Govindaji Gaudiya Matha on Kieth Harrow Blvd, Arrowood Apartments on South Course Drive, and Villa Adora Apartments on Beechnut St in Houston,” Mr. Desai said.

“The kind of support we are getting from other Indian American community organizations for the food drive is phenomenal. Reflecting the age-old Hindu tradition of “Anna Daan” (providing food to the needy), many Hindu Temples, religious and cultural organizations and altruistic individuals from the community have joined hands with us to serve the underserved,” Mr. Desai said.

“Nationally, Sewa has distributed more than 635,000 masks and other protective materials to physicians, healthcare staff and to the first responders such as police officers and firefighters in the last 12 weeks. As hunger spreads through the communities due to the economic impact of the pandemic, we are moving into the next stage to ensure that people do not go hungry,” Mr. Desai said.

Gujrati Samaj, Shree Nathji’s Haveli VPSS, Chinmaya Mission, and Vadtal Dham Shree Swaminarayan Hindu Temple joined hands with Sewa to distribute 16,500 pounds of food in three apartment complexes in a drive-through event. In all of these drives people received several hundred pounds of vegetables and fruits and hundreds of gallons of milk and masks.

Sewa International, a Hindu faith based, Indian American nonprofit organization, has extensive experience in disaster rescue, relief, and rehabilitation operations having responded to 24 disasters in the US and abroad.