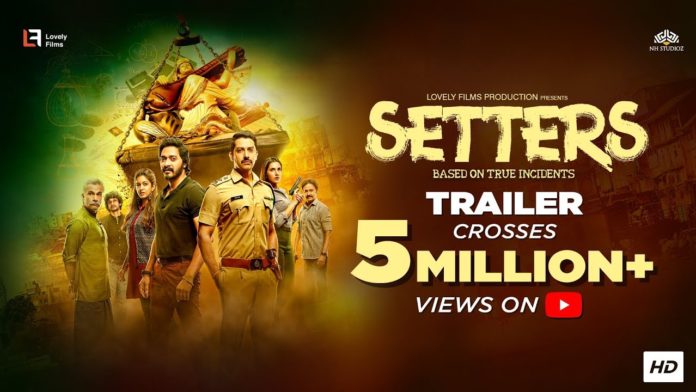 Welcome to modern India, the land of progress and corruption. Ashwini Chaudhary’s “Setters” takes us directly into the heart of the subject, where the seeds of corruption are planted into the younger and future generations of the country, a scam on competitive examinations.

The narrative reveals how students use unscrupulous means to succeed in the competitive exams and how this “cheating” is a thriving business for some, where examination papers are leaked, proxies appear for the actual candidates and the various methods and technologies used for cheating in these competitive exams.

Set in the heartland of India and designed as a cat-and-mouse, crime thriller, the plot follows Aditya Singh (Aftab) a conscientious Inspector of the Special Investigation Team (SIT) whose endeavour is to put an end to this corrupt system. He tries to do so by trailing Apurva (Sheryas) a pawn who soon becomes the kingpin of the fraudsters, manipulating the Railways Recruitment Exams, The Banking Exams, The Medical and Engineering Entrance Exams.

The subject for the story is well-researched, but the route taken by the writers and director is oft-seen and cliched. Aditya assembles the crack team which consists of officers who are rejected as well as dejected by the system.

Whereas Apurva masterminds a team of conniving and alert survivors, who are always a step ahead of the police.

While the tone and pacing is pitch perfect, the sub-plots and dialogues spoken in the local lingo add flavour to the telling of the tale. The complexities of the subject, unfortunately are not neatly ironed out, making the scenes appear chaotic, convoluted and at times boring.

On the performance front, Shreyas and Aftab are perfunctory in their stereotypical character graphs.

Pavan as the foreboding and ruthless Bhayaji, Apurva’s guru and the don of the “cheating” business, steals the show from the rest of the cast. Vijay Raaz as the multi-faceted Nizam adds nuances to his poorly etched character.

Ishita Dutta as Bhayaji’s daughter Prerana and Apurva’s love interest hardly has anything much to offer as the film does not focus much on their romance. Sonnalli Seygall as Inspector Esha is sincere and passable.

On the technical front, Santosh Thudivil’s camerawork is at times not up to the mark, but nevertheless he manages to capture the locales and the subject in a very realistic manner.

Rameshwar Bhagat’s razor sharp edits are smart and intelligent, depending upon how you look at those. In one instance the police is chasing a fraudster, it is a day chase and suddenly the chase continues in the night shot, only goes to reveal the time taken. And in another instance, the edit is done on the sound of a slap and the visual transits to an ice-cube dropping in a glass of whiskey. Both transitions were smooth and noteworthy.

Overall, “Setters” is a serious film that lacks the zing of a hard-hitting film. (IANS)