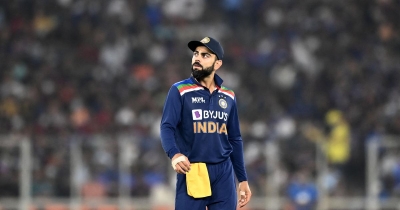 New Delhi– It’s no secret that talismanic India batter Virat Kohli has been in a prolonged lean patch. The right-handed batter hasn’t scored an international century since November 2019.

In the tour of England, Kohli couldn’t score a half-century in matches across all formats. With Kohli not a part of white-ball trip to the Caribbean, there were speculations that the batter might play in the ODI series against Zimbabwe in August.

Asked about the same, former India cricketer Saba Karim, who has previously served as a member of the senior selection committee, feels that the current selection panel and team management need to decide if they see Kohli as an essential member for the Men’s T20 World Cup in Australia in October-November.

“First, I think the selectors and the team management have to figure out whether Virat Kohli is essential for India’s preparation for India’s T20 World Cup side or not. And once the selectors decide the team management feels that Virat Kohli is essential to the team’s success then I’d chart a path for Virat Kohli’s come back to great form. I think that’s the time when the selectors or the captain or Rahul Dravid would love to have a chat with him and then try and take it forward,” said Karim on ‘Sports Over The Top’ show on Sports18.

Karim felt imposing the condition of playing ODIs against Zimbabwe to be in frame for the World Cup shouldn’t be on Kohli. “I would not want to have any kind of imposition on Virat Kohli that ‘Hey listen, you have to come back and play this Zimbabwe series otherwise we’ll not pick you for the World Cup T20.’ So, I think once you decide that he is such an essential player for the team’s success, then I reach out to him. I’ll say okay, it is up to you to decide whether you want to come back and play the Zimbabwe ODI or you want to take an extended break and come back for the Asia Cup T20.”

Continuing from Karim’s views, former New Zealand cricketer Scott Styris thinks that playing in ODI series in Zimbabwe will not give Kohli significant gains from form perspective. “Firstly, I loved hearing what a selector goes through in the process that they don’t just simply pick a team or pick the best players. There’s a real methodology around how they go about putting a team together. I can tell you there are plenty of times I wish I could have a conversation with our selectors back here in New Zealand about certain things.”

“So, I loved hearing that, but I’m with you a hundred percent. I think it is a lose-lose for Kohli. I’d love to see him take a complete break from the game for a little while and come back. Ask the question as selectors and coach Rahul Dravid, I think he’s got a big part to plan as to how much preparation time you need to be at a hundred percent when the world cup starts and then work backwards from there and then build that schedule that Saba was talking about.”

“So yeah, Zimbabwe, I’d forget about it because I don’t necessarily think there’s a lot to gain from him. He might score a cheap hundred, which goes great for the confidence but doesn’t necessarily change too much moving forward because I still believe he’s the key man for India.”

Karim further quashed suggestions of phasing out Kohli from the Indian team if he doesn’t get back his run-making self, terming it a “blunder”. “I would say that’d be a blunder from India’s perspective. Never do that. And I think Virat is such an important figure in the Indian line-up. The way I look at it, the way Rohit Sharma and Rahul Dravid have backed him, that makes sense because they know that Virat Kohli fully back in good form, will be extremely beneficial for the team’s success in the world cup T20.”

“So, I think for the time being, as I said earlier, have a chat with Virat Kohli, find some kind of a common part and then try and take it forward and make him feel as much as possible that he’s such an essential player for India’s success and take a call after the world cup T20 have another conversation with him and then decide how to take it forward.”