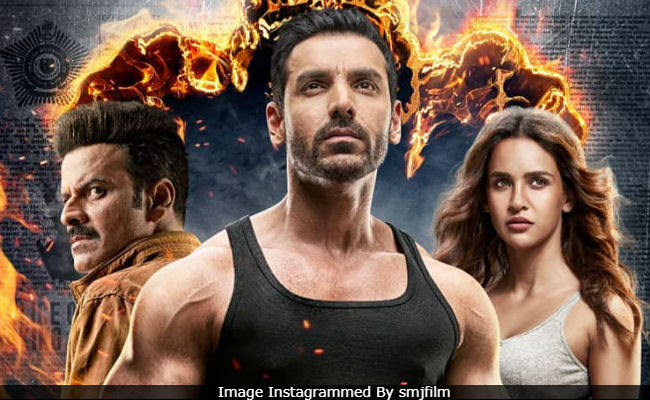 “Satyameva Jayate” which means, “Truth always triumphs”, is designed as an action thriller. It is a revenge story, where a son fights the system, and makes it his raison d’etre to restore his father’s lost dignity.

The film begins with Veer (John Abraham) an ex-army man becoming a vigilante, killing corrupt police officers in the city of Mumbai. The first police personnel killed was from Santa Cruz Police station. The second from Andheri Police station. The police force is baffled with the ghastly deaths.

The Commissioner puts his favourite and honest DCP Shivansh Rathod in charge of the investigation. No sooner than he takes charge, the vigilante calls DCP Shivansh and forewarns him about his next target.

The DCP accepts the challenge only to realise too late, that the killer had a systematic approach in targeting his victims.

He decodes the motive too in a jiffy. But then, nobody can break the law, so the vigilante has to be arrested. Thus begins the cat-and-mouse chase between the vigilante and the investigating officer.

The plot disrobes the police and exposes the horrific level of corruption that is prevailing within the system. While the premise of the film is anti-corruption, it does have a patriotic tinge, but all that is lost in the drama.

While the narrative is earnest, the plot, laden with cinematic liberties although credible, takes you by surprise. It seems like a Manmohan Desai fabrication with all the tropes of a good Bollywood masala film, which include an item number “Dilbar” picturised on Nora Fatehi.

The dialogues are intermittently impactful. They seem to be over-egged in an attempt to give its characters a larger than life image.

The first half of the film is done up in a slick and exciting manner which is intriguing and keeps you glued to the screen.

The second half that starts with the back story of Veer, off tracks the momentum set in the first half and hence, the tale drags.

Being an action hero, John Abraham is sincere as Veer, who has turned into a large-hearted and conscientious citizen who loves the oppressed immensely, after the death of his father.

He essays his part with panache.

Though the film with its messages is kind of fascinating, its impact as a vengeance drama lacks the superhero punch.  (IANS)