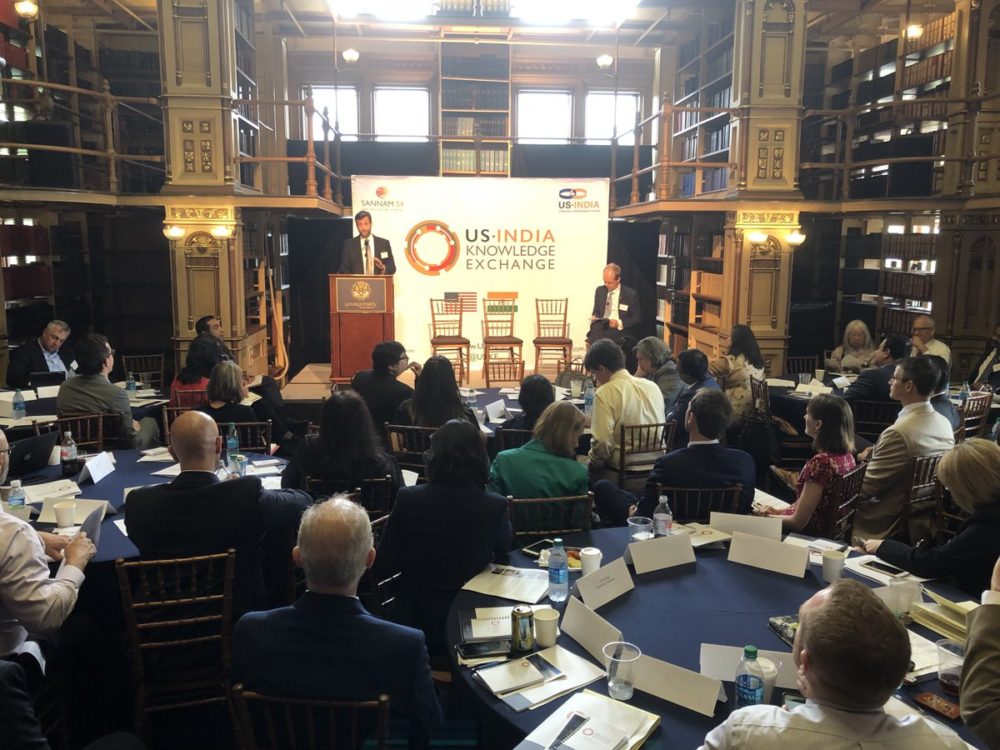 Washington, D.C.—Sannam S4 and the U.S.-India Strategic Partnership Forum (USISPF) together launched the U.S.-India Knowledge Exchange at on Tuesday, June 19, 2018 at Georgetown University.

U.S.-India Knowledge Exchange was launched to improve collaboration between American and Indian higher education initiatives by partnering with universities, corporations, NGOs, and government institutions from both countries. The day-long event included panels featuring speakers from the U.S. Government, Embassy of India, Washington D.C. and both U.S. and Indian universities. Speakers discussed an array of important topics, including:

The event brought universities, policy-makers, corporations, and non-government entities together to encourage collaboration and address issues in the U.S.-India higher education relationship. Adrian Mutton, Founder of Sannam S4, chaired the session, and said, “There is significant interest in expanding research and collaboration activities between the U.S. and India. The U.S.-India Knowledge Exchange will work with a range of key stakeholders from both countries to identify new projects and create a more efficient framework for their delivery than currently exists.” Dr. Mukesh Aghi, President and CEO of USISPF, provided introductory remarks and noted the importance of the role of education in enhancing business, saying, “Investment will come in states where it’s easier to do business and education is a critical aspect of improving the ease of doing business and increasing investment.”

The day-long meeting resulted in universities, government officials, and private sector organizations emphasizing the importance of the higher education relationship between India and the United States. Following the launch, participants are now planning regional meetings in Seattle, New York, Atlanta, Houston, San Francisco and Chicago at the end of August and will lead a high-level U.S.-India Knowledge Exchange delegation to India in the fall.

“The Government of India’s total spending on higher education currently totals $5 billion. In contrast, the 200,000 Indian students studying in the United States brought in a revenue of $6.5 billion.,” said Nilkanth Avhad, Counselor of Economic at the Embassy of India. Mr. Avhad noted the importance of increasing cultural and educational exchange both ways, and suggested avenues for the participating organizations to do so.

The U.S.-India Knowledge Exchange aims to convene the leading U.S. and Indian minds in academia, innovation, public policy, private sector and non-profit organizations with the purpose of facilitating greater cooperation and collaboration on a range of significant and mutually strategic initiatives to the benefit of both nations. One of the stated objectives of NITI Aayog, the Government of India’s National Institution for Transforming India focused on achieving the Nation’s Sustainable Development Goals is: ‘To create a knowledge, innovation and entrepreneurial support system through a collaborative community of national and international experts, practitioners and other partners.’ In light of this, the participants of the U.S. India Knowledge Exchange envision playing an active role in supporting these goals. Amongst other valuable contributions, The Exchange hopes to prompt a revival of the official India-U.S. Higher Education Dialogue between the two governments.

In all the 20+ countries Sannam S4 operates, its local teams deliver a comprehensive range of services – including market feasibility and strategic planning, financial and HR compliance, tax and accounting support, staff recruitment and HR advisory and support in establishing local teams and project infrastructure.

The U.S.-India Strategic Partnership Forum (USISPF) is a non-profit organization, with the primary objective of strengthening the U.S.-India bilateral and strategic partnership with offices in Washington D.C., New York, Silicon Valley, New Delhi and Mumbai.