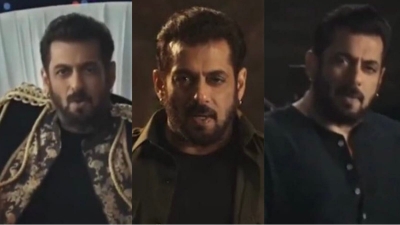 Mumbai–From Gabbar Singh of ‘Sholay’ to Kancha Cheena of ‘Agneepath’ and Mogambo of ‘Mr India’, Salman Khan slips into the persona of each of these Bollywood baddies in the new round of ‘Bigg Boss 16’ promos.

In the latest promo, Salman dons the look of Amrish Puri’s Mogambo by wearing a black jacket with gold detailing, and that iconic bracelet. He sits on a white throne with crystal balls, just like Mogambo was shown sitting in the 1987 movie ‘Mr India’, featuring Anil Kapoor and the late Sridevi.

He repeated the popular dialogue from the film in a different way and said: “50-50 kos door jab bachcha raat ko royega to maa kahegi, beta so ja varna Bigg Boss aa jayega (Even 50 km away, when a child will cry at night, the mother will say, ‘go to sleep or Bigg Boss will come’).”