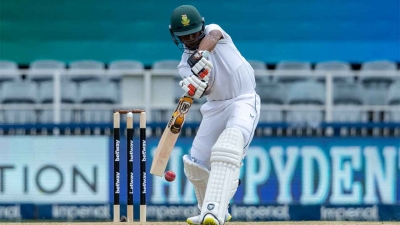 Cape Town– South Africa batter Keegan Petersen on Friday said he stuck to his methods and had to fight it out during the third Test against India at Newlands Cricket Ground. In the decider Test, Petersen was superb in making 72 in the first innings and followed it up with a sublime 82 in the second innings to set the base for a successful chase of 212 to help South Africa clinch the three-match series 2-1.

Apart from winning the Player of the match, Petersen was adjudged ‘Player of the Series’ for being the highest run-scorer in the three-match series by amassing 276 runs in six innings at an average of 46.

“I don’t know how I feel, it hasn’t sunk in yet. Happy, emotional but just grateful to have had the opportunity. I took every little positive I can from every innings and build on that,” said Petersen in the post-match presentation ceremony.

South Africa captain Dean Elgar had lavished praise on Petersen for his efforts in the series.

“He’s dominated domestic cricket, awesome to see him have a great series. Long may he grow, there’s a lot of improvement from his point of view. The world is his oyster. Even though he’s someone older, he’s winning to learn. He’s a proper character within that team environment. Proud of what he has achieved.”

Petersen revealed it hasn’t been easy for him and had to put in lots of hard work in doing well in the series.

“It’s been a tough journey, not easy. Have had to stick to my guns and fight it out. It’s been a long journey, can’t really tell the whole story right now. It’s not been easy even coming into Tests; challenging wickets, changing conditions, have had to deal with what has been in front of me.”

The 28-year-old signed off by saying that spending lots of time at the crease made it easier for him to bat on and get runs. “We’ve always had to tough it out against a high-quality bowling attack, high-quality team. Just spending time at the wicket is crucial. Evident longer you bat, easier it gets. I enjoyed every moment of it.” (IANS)