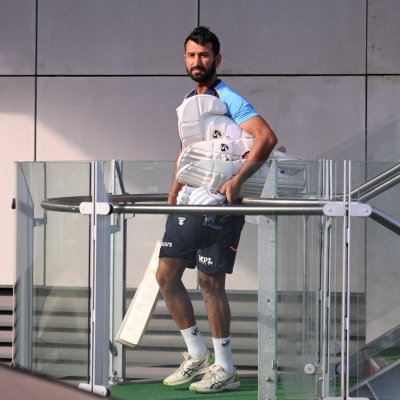 Johannesburg– India batter Cheteshwar Pujara said on Thursday the visitors will have to be a little bit patient in taking out the remaining eight South African wickets in the second Test.

He also backed the bowlers to do the job for the team with four sessions left in the match.

“This Test is very similar to the last one we played here. I feel the pitch was a little more up and down last time. We feel it will open a bit more again today, but we have to be a little more patient. I think the recent success means a lot to all of us, especially how we played in the last two or three year, especially in England and Australia. That gave us a lot of self-belief and confidence as a team,” said Pujara in a pre-match chat with the broadcasters.

Pujara felt the bowlers, especially off-spinner Ravichandran Ashwin, will come in handy on the pitch at the Wanderers. “The kind of bowling attack we have, we have belief in them and can bowl the team out no matter what the conditions are. We are confident that our bowlers can take 20 wickets. We are hopeful of that even today. Also, Ashwin plays a major role because there is little bit of spin as well. So, we are hopeful the bowlers will do the job for us.”

In India’s second innings, Pujara was the second-highest run-scorer with an aggressive knock of 53.

Asked about the same, Pujara remarked, “I thought that on a pitch like this you have to take your opportunities. Whenever you see a loose ball, you have to punish it. You cannot wait for loose balls, otherwise pressure is building on you as a batsman. There are not enough runs on the board if the ball kicking from back of a length hits you on the gloves and takes the edge. You have to make sure the scoreboard is ticking. That was my gameplan before the start of the innings.”

The 33-year-old signed off by crediting the bench strength for stepping up whenever an injury happens in the Indian team. “On the day of the game, Virat had this spasm and had to take the call in the morning. So it’s not easy for him as well. But the best part is the bench-strength of the team. Even in Australia the bench strength stepped up with so many injuries. Same thing happened here. Hanuma got in and played really well in the second innings. Credit goes to the players outside the XI who keep working hard behind the scenes and take their opportunities whenever they come.” (IANS)