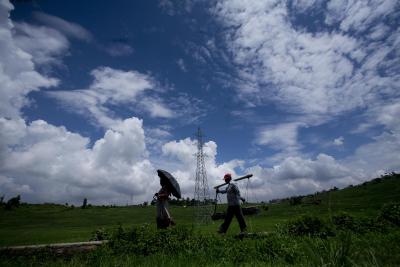 The RBI Governor in his August policy address noted “The robust outlook for agriculture and rural demand would continue to support private consumption”. Rural India has been cited as the economy’s silver lining since the onset of the pandemic, often due to agriculture, its robust output and exemption from policy restrictions. Government direct support schemes like MGNREGA and PM-KISAN are also targeted towards agri. In our note last year on the rural economy (link), we had detailed its structure, high share of non-agri households, dependence on wage income even by agri households and the need to avoid equating agriculture with rural.

In the last one year, agri contribution to GDP has been healthy but some higher frequency indicators, particularly for rural, have been more mixed. Covid infections have also been higher in rural areas during the second (vs the first) wave. With optimism about the rural economy continuing, we assess the state of both the agri and non-agri parts. Expecting the rural economy alone to do the heavy lifting could be a tall order.

Indicators frequently looked at as rural economic barometers are two-wheeler sales, tractor sales, fertilizer sales, agri exports, etc. Of these, two-wheeler sales are softer of late but is slightly better than its weak pre-pandemic trend. Tractor sales picked up and are now at levels above the flat trend in previous years. Agri exports have picked up well too while fertiliser sales have stayed buoyant and should seasonally pick up further.

Thus, agri indicators appear buoyant at a higher level. We now look deeper at both the agri and non-agri parts to assess their health, risks and thus the likely impact on rural consumption.

Rural wage growth picked up sharply last year from April to August due to relatively lower infection spread and government exemption from restrictions on activities. It then settled in an upward trajectory which has weakened of late, partly due to base effects. Higher rural labour pool than before, weaker investments and more rural infections recently are headwinds.

Further, agri wage level has been above its pre-pandemic trend since mid-2020 while non-agri wage has been softer vs its trend. The stronger agri wage growth also masks the weaker growth in ‘core-agri’ wages.

Nominal rural wage growth in the last one year has been narrow. A broader pick up needs a broader economic recovery.

Food inflation (proxy for agri income although presence of middlemen in the supply chain could reduce the pass through to farmers) was strong in 2020 and continues to stay positive. However, expense-to-income ratio (CPI non-food-rural to foodrural) has picked over the years and is currently above 1. Ratio of rural to urban inflation also suggests rural inflation has been relatively lower for food in recent years but has stayed elevated for core (headline excluding food and fuel) for much longer. Farm input cost growth, closely correlated with crude oil price, has also been very strong.

Thus, agri indicators elicit optimism but agri net incomes may not have improved. For non-agri, fall in net income could be worse with lower wage growth and similarly high expenses.

At the onset of the pandemic, government announced support through food grain distribution, cash transfer, free gas cylinders, additional MGNREGA expenditure, etc. However, given India’s fiscal position, measures were nuanced in terms of actual expenditure and focused on survival.

MGNREGA is an important quick-response scheme for a part of rural households and demand for it increased during the first and second waves of infections, although it offers a lower wage. While this targets wage earners, the PM-KISAN scheme targets agri land owners. Food grain distribution program is in place till November. MSP hikes announced this year for Kharif and Rabi season crops were not high but targets at least 50 per cent return over a defined cost. Thus, government support has been beneficial but targeted and nuanced.

Additionally, central government’s budget estimate for FY22 tax collection was quite conservative while actuals have been strong. However, capital expenditure so far as a percentage of the full-year estimate is lower than previous years and revenue expenditure excluding interest payments is 1 per cent below 2019 levels. Rural spending, which picked up sharply in H1 of FY21, has eased. This nuanced and recently softer government spending alone, although essential, may not be enough for a comprehensive recovery in rural consumption.

Some risks on the horizon for agri

South west monsoon season (Jun-Sep) rainfall’s temporal and spatial distribution this year has not been very smooth, although quantum picked up in the last few weeks. Kharif season crop sowing, particularly for food grains, has recovered well since end of July but the uneven rainfall distribution could impact yield and thus quantity and quality of output. Recent surge in rainfall could also hit the harvest, even of perishables. Reservoir levels are lower than both normal and last year levels in 3 of 5 regions, although it has improved recently, and this matters for the following Rabi sowing season. However, a delayed withdrawal of monsoon (as expected by the IMD now) and prospects of La Nia (also flagged by meteorological bureaus of US, Australia and typically associated with higher rainfall in India) could help reservoir levels and soil moisture, beneficial for the next season. In the meantime, rice and wheat stocks are well above mandated levels.

A brighter spot cannot light up the whole economy

Agri contribution to GDP has been healthy and high-level indicators suggest the same. However, rural wage growth has started to slow, partly due to base effects, with both core-agri and non-agri wage growth slowing even more. While this is also due to labour dynamics and spread of Covid, wages are inter-dependent and weakness in one part can feed into the other. Agri incomes seem to have increased but agri input costs and overall rural expenses likely increased even more. Central government support has been nuanced and recently softer but essential, although this alone may not be enough for a comprehensive recovery in rural consumption. For agri, near term risks include lower kharif season output due to uneven rainfall, possible crop damage from the recent surge in rainfall and lower regional reservoir levels.

We need to remind ourselves agri alone is not equal to rural. Further, agri output has been relatively more robust in an economy where manufacturing and, particularly, services are still catching up to pre-pandemic levels. In an absolute sense, even agri is facing weaker wage growth, rising costs and risks around the current and upcoming crop seasons. Non-agri too is facing similar issues on wages & living expenses and needs a broader investment-led economic recovery even more. To get the ball rolling, government capex helps. However, an economy does not function in silos and only a K-shaped or agri-driven recovery cannot be complete. Thus, a brighter spot is just that and one cannot expect it to light up the whole economy, for which we need a genuine growth-driver in the form of an employment and wage cycle. (IANS)