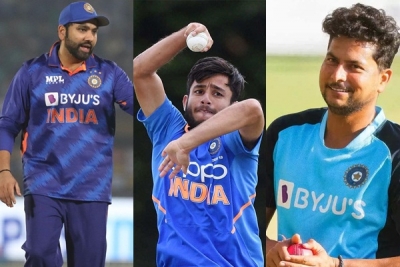 New Delhi– India on Wednesday announced an 18-member squad for the upcoming ODI and T20I series against the West Indies, with Rohit Sharma returning to lead the team and leg spinner Ravi Bishnoi getting maiden call-up to the senior side.

Rohit, who was ruled out of the South Africa tour because of a hamstring injury has fully recovered from his injury and will lead the side. He cleared the mandatory fitness test at the National Cricket Academy in Bengaluru following which he attended the selection meeting with the senior selection committee.

It would be the first series for Rohit as the full-time ODI skipper after he replaced Virat Kohli in December, last year.

However, all-rounder Ravindra Jadeja is undergoing his final stage of recovery post his knee injury and will not be available for the ODIs and T20Is. Hardik Pandya also remains sidelined as of now.

The All-India Senior Selection Committee led by Chetan Sharma has rested pacers Jasprit Bumrah, Mohammad Shami for the series. On the other hand, KL Rahul will be available from the 2nd ODI onwards.

Young leg-spinner Bishnoi has been rewarded with a maiden India for the T20 series. He impressed everyone with his bowling skills while playing for Punjab in the last two seasons of Indian Premier League and has been picked up by new franchise Lucknow Super Giants from the drafts for the next season of cash-rich league.

Bishnoi first came to limelight after making an impression in the 2020 Under-19 World Cup.

The other big call made by the selectors was bringing back Kuldeep Yadav into the 50-over format. The left-arm spinner has been on the sidelines for a long time and was only handed an opportunity in Sri Lanka last year when India were forced to pick a second string side.

Meanwhile, batting all-rounder Deepak Hooda has also earned a surprise call-up to the ODI squad whereas Harshal Patel finds a spot in the T20I squad. Pacer Avesh Khan has been picked in both the squads with the selectors opting to retain Bhuvneshwar Kumar only in the T20I set-up.

Veteran off-spinner Ravichandran Ashwin has been handed a break but his Tamil Nadu teammate Washington Sundar makes a return after missing out on the South Africa tour due to Covid-19. All-rounder Venkatesh Iyer has been chosen only in the T20I squad having already been benched in the third and final ODI in South Africa recently.

India are set to play three ODIs at the Narendra Modi Stadium, Ahmedabad from February 6 followed by the T20I series at the Eden Gardens, Kolkata from February 16.