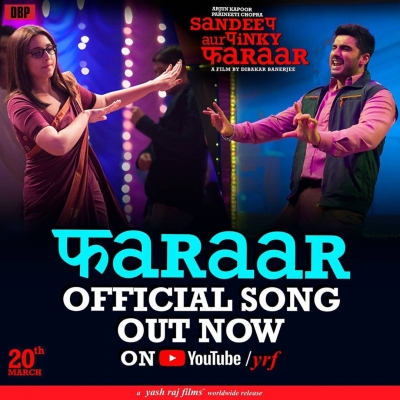 Dark and quirky, sombre and amusing. Dibakar Banerjee’s cinema is often typified by ironies. With “Sandeep Aur Pinky Faraar”, the filmmaker tries using the trademark idiom to narrate a story of the societal divide that erupts when a boorish heartland cop crosses path with an educated, refined bigtown girl who is a corporate bigshot.

The idea is to set up a battle of the sexes using the language of black comedy, even as the film attempts to draw focus on patriarchy, and towards two radically different Indias that have forever struggled to coexist.

Barring his debut directorial “Khosla Ka Ghosla”, Banerjee’s sense of cinematic humour has never been mainstream. With Parineeti Chopra and Arjun Kapoor toplining the cast of his latest, Banerjee has not surprisingly tried to simplify his grammar of filmmaking for the larger audience, at least at the storytelling level. The outcome never comes across as assured.

Banerjee and co-writer Varun Grover imagine Sandeep Walia, or Sandy (Parineeti Chopra) as a top-ranking officer in a private bank. She is pregnant with the boss’s child and, not one to play by code of ethics, starts blackmailing him over a Ponzi scheme. Boss decides to have her eliminated, and playing a big role in the ‘job’ will be suspended cop Satinder Dahiya, or Pinky (Arjun Kapoor).

Without giving away spoilers, a twist in plot makes him realise his life is in danger too, and Pinky ends up on the run with Sandeep. They don’t really like each other. To Sandeep, Pinky is an unsophisticated lout. To Pinky, Sandeep is the sort of intelligent woman his world never taught him to accord much respect.

As the story moves, we see beneath those obvious character traits. The frustration over his deprived social standing shapes Pinky’s existence as one that is almost wholly driven by greed. Sandeep’s picture of polished perfection hits a jarring note as her back story unravels in detail.

The film tries to tell their tale with humour, and with an undercurrent comment on class and gender disparity that dictates almost every aspect of life in India. Only, the narrative needed to be crisper.

Dibakar Banerjee’s storytelling appears too slow, especially in the second half, and the treatment impedes the intended slow-burn impact the film was trying to deliver. The idea to use dark humour in a subject as this was always ambitious. Banerjee struggles to pass muster.

Parineeti Chopra comes up with an assured performance as Sandeep. She balances well the sophisticated facade with her protagonist’s imperfections. In comparison, Arjun Kapoor was essaying a character that would seem far more repulsive. He is adequate but maybe the role of Pinky required to be fleshed out beyond the stereotypes that sustain it.

Beyond its leads, though, the film benefits from a rich pool of talent that makes up the prop cast. Jaideep Ahlawat, Raghubir Yadav, and Neena Gupta are in top form, essaying interesting characters.

The film delivers a climax that is unusual by Bollywood standards, removed from formula. The problem is by the time the finale arrives you might just about lose interest, given the overall sluggish pace. For an effort that was pitched as an edge-of-the-seat entertainer, that’s an irony for sure — not in the least the sort you expect from a Dibakar Banerjee film.

“Sandeep Aur Pinky Faraar” is far from the best in the filmography of the man who gave us “Khosla Ka Ghosla”, “Oye Lucky! Lucky Oye!”, “Love Sex Aur Dhokha” and “Shanghai”.