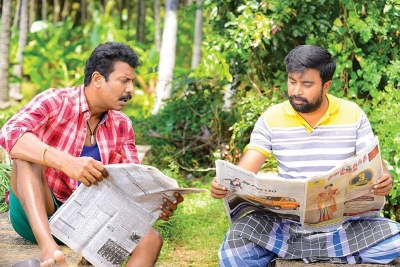 Ponram’s ‘MGR Magan’ is a light-hearted entertainer, much like his ‘Rajini Murugan’ and ‘Varuthapadatha Valibar Sangam’, both of which went on to become superhits.

To his misfortune, though, the comedy element in ‘MGR Magan’ doesn’t work as splendidly as it did in his other films and what we are left with is a just-about-decent film that isn’t bad enough to be trashed, nor good enough to be praised.

Anbalippu Ravi (Sasikumar) is the only son of a renowned naturopath named M.G. Ramasamy (Sathyaraj), aka MGR. Their relationship is a tumultuous one, with the son doing everything in his power to annoy his dad, and his dad responding by not allowing his son to set foot into the house.

The physician lives next to a hillock full of medicinal herbs in the picturesque Theni region. A greedy businessman/industrialist (Pala Karuppaiah) has his eyes set on the hillock, which he intends to turn into a quarry. MGR, who is dependent on the hillock for his herbs, won’t allow the industrialist to have his way.

Both continue to fight over the hillock in court, until one day the verdict goes in favour of the industrialist. How the son comes to the dad’s aid when he needs him the most is what the film is all about.

The good thing about Ponram is that he doesn’t attempt to preach. ‘MGR Magan’ doesn’t have a complex plot or deep, layered messages. It looks to narrate a simple, yet entertaining story that is set against a rural backdrop.

Certain sequences in the film make you laugh. For instance, the desperation of Sasi’s bachelor uncle, played by Samudrakani, to get married and the events that take place when he finally gets everybody to go see the bride-to-be and finalise his wedding plans, are all genuinely funny. The problem is that these are few in number.

Several sequences don’t come across as being funny because of a casting problem. Timing is of the essence if a comedy sequence has to work. In ‘MGR Magan’, the timing gets lost on several occasions and what could have been a hilarious sequence, ends up as being just another attempt at humour.

Mrinalini Ravi, who plays the heroine Anupriya, does a neat job of her limited role in the film. Samudrakani is funny. The gifted actor, who impressed us with his intense, power-packed performances in critically acclaimed films such as ‘Visaranai’ and ‘Vadachennai’, showcases an entirely new facet in this film.

Sasikumar, as the son of the physician, does a decent job, but is unable to excel in the role. Sathyaraj, as always, is brilliant in the film, playing both the serious portions and the comedy parts with equal ease.

Vinoth Rathinasamy’s camerawork is outstanding. His camera seems to have gleefully captured the breathtaking beauty of Theni.

In short, Ponram’s ‘MGR Magan’ isn’t bad. But it also doesn’t provide us the kind of fun that his earlier films have made us expect of him. (IANS)