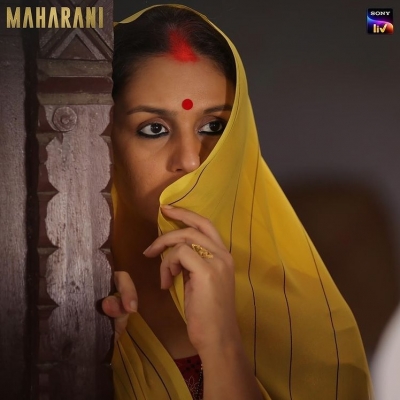 “Maharani” tells a story that could seem bizarre in many parts of the world (the observation is pertinent because, dropped on OTT, the series does vie for international eyeballs). In India, an illiterate wife of an indisposed chief minister being pushed into the hotseat of Bihar politics makes for slice-of-life realism.

For creator Subhash Kapoor, a scoop off the forever simmering cauldron that is Bihar politics would seem like an automatic advantage when it comes to setting up instant drama. The flip side becomes evident soon enough as the show unfolds. Ten episodes would seem inadequate to sum up the infinitely complex socio-politics of Bihar, where scam and scamster, crime and criminal seem to be thriving in every cranny of the system, coupled by the fact that the state’s cast and class equations set up a maze that is nearly impossible to decode.

Kapoor and series director Karan Sharma have only scraped the surface of the maze, to set sketchy characters and plot situations.

The narrative echoes many things that have defined contemporary Bihar in newspaper headlines. There’s horse trading in the power corridors of Patna and mass Naxalite strike to avenge killings by upper caste. A scam to the tune of 958 crore involving an important ministry is thrown in. The fragile and ever-changing bonds between the politician, the criminal and the cop, dictated by money power, come to fore time and again. Many real-life incidents — notably, the Laxmanpur Bathe massacre of 1997, where several scheduled caste people were allegedly killed by the upper caste Ranvir Sena (passed off here as Veer Sena) — seem to find resonance in the screenplay.

At the core of the story, set in the nineties, is Huma Qureshi as Rani Bharti, dutiful wife of Bihar Chief Minister Bheema Bharti (Sohum Shah). Bheema has risen from the lowest stratum of society and, much to Rani’s annoyance, is hardly at home with family. The narrative accords a longer than necessary footage to establish that picture of Bheema and Rani’s happy family portrait, though the big twist follows soon enough.

Bheema is shot, he survives the attack, but is rendered immobile for months. In a dramatic shake-up to the state’s political machinery, he literally has Rani dragged out of the kitchen and thrown into chief ministerial duties, even before she can figure out what’s going on.

Subhash Kapoor’s writing is erratic, as the narrative throws in the mandatory upper caste political rival (Amit Sial) within the party, as well as the opportunistic fence-sitter (Vineet Kumar). As the tension of the improbable task of running a state bears down upon Rani, the narrative tries depicting her almost absurdly insane situation with a touch of humour. In one such sequence, where Rani makes a mess of the swearing-in ceremony, the impact is tepid. Another scene, where she is literally carried to the CM’s office by a group of lady guards on her first day, looks clownish.

Rani’s transformation — from a gullible bumpkin to a woman who starts using her instincts to understand the reality all around — is paralleled with the games of deceit and intrigue that get increasingly heavy as the series heads to its finale. The shock of the reality she must contend with to fit into this crafty new world takes its toll, and Rani realises she will never be the happily gullible soul she once was.

Huma Qureshi does well to bring alive Rani’s lack of polish but her transformation into a CM of substance almost instantaneously (when a cabinet minister quips she is a chief minister only “technically”) seems too improbable. Sohum Shah, Amit Sial and Vineet Kumar live up to their billing, adding nuances to their portrayals. Pramod Pathak and Kani Kusruti as Bheema and Rani’s aides respectively are perfectly cast. Most actors of the prop cast are a delight to watch.