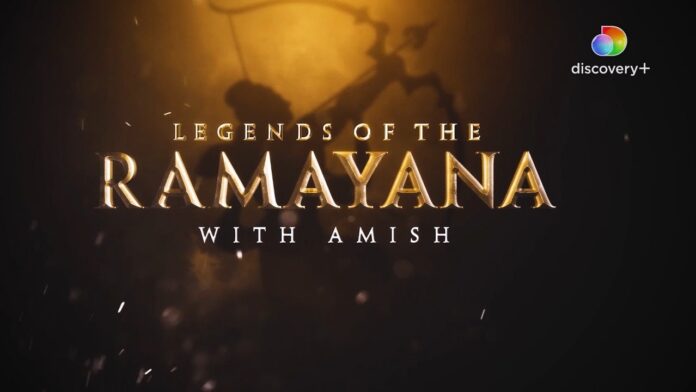 Series: ‘Legends of The Ramayana with Amish‘ (Streaming on discovery+).

Duration: Average 45 minutes per episode (Three episodes in all).

There are many versions of the ‘Ramayana’ in Indian languages, apart from its Buddhist, Sikh, and Jain adaptations. Also, there are Cambodian, Indonesian, Filipino, Thai, Lao, Burmese and Malay versions of the tale. It is the Sanskrit version, written by Maharishi Valmiki, which is considered the original, but there is no proof of when it was written.

We are given to understand that there is about a 2,500-year gap between the actual events of the ‘Ramayana’ and the writing of the epic, it is debatable whether it is a myth, or a slice of history, or a bit of both.

The text of the ‘Ramayana’ centres around the narrative of Rama, crown prince of Ayodhya, deliberating upon his victory over evil, in reality, we’re told: “It is a symbol of the battle of the soul that takes place within as much as it does on the battleground.”

This three-episode docu-series streaming on discovery+, hosted by the renowned author Amish Tripathi (of the Shiva Trilogy fame), does not tell us the story of the ‘Ramayana’ or its philosophy. Instead, he indulges us with ancient, unexplored stories and myths around the ‘Ramayana’ by literally taking us on a 5,000-plus-kilometre pilgrimage to all the places in India and Sri Lanka where Ram had left his footprints.

In the first episode, ‘The Sacred Journey’, Amish tells us about Ram’s lineage, his elder sister Shanta and what made their father Dashrath exile him, and why for 14 years.

Amish then takes us to Ayodhya and Prayagraj in Uttar Pradesh, Chitrakoot in Madhya Pradesh, Bastar in Chhattisgarh, and Lonar Lake and Panchvati in Maharashtra. The episode is also peppered with information correlating the continental drift, defining the importance of the number 11, the Ramnami community, and how Ravana kidnapped Sita.

The second episode titled ‘The Search of Sita’ takes us from Panchvati to Hampi, to Anegundi, and lastly to Danushkodi in Rameshwaram. It also tells us stories of Jatayu, Sabri, Sugriva, and Hanuman and how they helped Ram in his endeavour.

‘The Many Faces of Ravana’ is the final episode. The narrative mainly takes place in Sri Lanka and explores the island in-depth in connection with the epic.

Overall, at each location Amish shares interesting information that bridges the mythology with geography, thereby reinforcing the story as a historical tale.

With comments from 13 personalities, who include authors, scholars, a hydrogeologist, a descendent of the Vijayanagar Dynasty, a temple trustee, a speleologist (a specialist in caves and cave systems), and an ex-bureaucrat, the narrative reinforces the premise of the series.

The production quality of the documentary is of a high standard. The 2D animation seamlessly meshes with cinematographer Prakash Simwal’s live-action frames, which capture the locales beautifully, making it a delight to watch the series. Also, the script and editing seem effortless and natural, making the series fascinating and a delight to watch. (IANS)