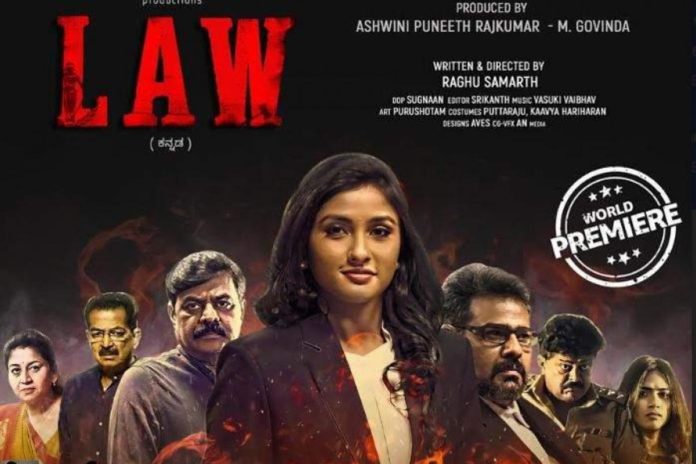 Decades ago, the Amitabh Bachchan-Rajinikanth courtroom drama “Andhaa Kaanoon” was themed around a basic question about law and justice. Does one necessarily have to be ethical while using the law to obtain justice? The question forms the crux of the Kannada film “Law” too, although the plot is wholly different.

Much like “Andhaa Kaanon”, this film could have made for an entertaining watch despite its larger-than-life illogic. “Law”, however, is crushed under the weight of its overwhelmingly sloppy treatment.

The sheer lack of craft about the film remind the fact that amateurish films coming from all across India currently threaten to drive the direct-to-OTT brainwave redundant.

For, random recall would show how, in a short while, we have had too many half-baked efforts across languages that would perhaps have struggled to find big screen release. You can think of “Virgin Bhanupriya”, “Ghoomketu” or “Chaman Bahaar” in Hindi. The Tamil release “Ponmagal Vandhal” and the Tamil/Telugu bilingual “Penguin” disappointed too, as did the Malayalam film, “Sufiyum Sujatayum”.

On paper, the film is positioned as a legal thriller/courtroom drama with a twist. The effort here is also to deliver a message about crime against women, and women’s empowerment.

Writer-director Raghu Samarth’s film, playing out a runtime of a little over two hours, makes you seriously question why it was made in the first place. As a thriller, “Law” is too insipid and laced with cliches to regale. As a commentative piece on womanhood, the film trivialises the very cause it tries championing given the unidimensional characters and execution.

The story takes off with young Nandini (Ragini Prajwal), a gangrape victim, walking into a police station late one night to report the crime. The cops are in no mood give her a patient ear. Instead, they snigger at her and pass crass comments. The inspector in charge gives a ‘valid’ excuse for cracking cheap jokes when the girl asks him to get serious: He has a heart condition, and the doctor wants him to be happy at all times. Things get worse when the girl’s father (Avinash) walks in. He just wants her to forget the whole episode, fearing shame if things become public.

The intent of the scene is obviously to highlight the apathy rape victims by and large continue facing all over India, even from lawkeepers and their families. The outcome, however, is a bad start to the film, given the bad writing and acting.

There is very little originality in the way the rest of the narrative flows. The three young rapists come from powerful family backgrounds. They walk, talk, dress and sneer in a way that you won’t have any problem identifying them as bad boys. In fact, as Nandini, a law graduate, decides to fight her own case (bringing back flashes of Jyothika in the recent “Ponmagal Vandhal”), almost all characters — good and bad — live up to stereotypes.

The second half of the film is almost entirely allotted to courtroom drama, as Nandini takes on the mighty advocate Shyam Prasad (Rajesh Nataranga), who is defending the three accused for — no prices for guessing — an obscene amount of money.

Quite inexplicably, marring any scope of gripping drama, writer-director Samarth introduces lame shots at humour as the courtroom proceeding begins. Sample this — the judge walks into the courtroom poring over his mobile, and then looks around and snarls at the room full of people: ‘What is this, why is everyone busy with their mobile phones like idiots?” Oh, and if you didn’t get the joke, the orderly standing by his side pulls a face and mumbles to himself: “And what was he himself doing?!”

The storytelling is that unimaginative.

There is an attempt to introduce a big twist in the second half, one that conceptually turns the story on its head. Without giving away spoilers, it raises questions on the notions of law and justice. The outcome, though, is too ‘filmi’ to leave an impact, owing to the way it is implemented.

Loud treatment of music (Vasuki Vaibhav) and camera (Sugnaan) in key moments only make matters worse, and the film does not have even one well-written sequence that might draw sympathy for the rape victim or revulsion for the men who commit such a heinous crime.

Weak storytelling affects the acting, too. Ragini Prajwal, despite being at the centre of a heroine-centric film, fails to come up with a performance that may resonate in your mind. Rajesh Nataranga as the defence lawyer Shyam Prasad and Krishna Hebbale as Parthasarathy Brahma, officer in charge of the case who adds to the film’s only twist, are the only actors who manage to make sporadic impact amid an otherwise forgettable cast and film.

“Law” feels like a B-grader from the nineties, a worn-out effort with almost nothing to recommend for itself. (IANS)