Bengaluru– For the first time at Bengaluru Zoo, two Asian elephants have been observed to scratch their body parts such as ears, mouth and neck areas using a twig tool they organised themselves, an official said on Friday.

Holding the long stick-like tool with their agile trunks, the jumbos were recorded scratching to relieve their itching.

“We have generally observed elephants using branches to dust their bodies but this is the first time we have documented two elephants, Sunder and Menaka, using twigs to precisely scratch at a targeted location,” a zoo official told IANS. 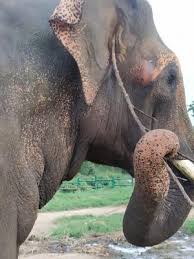 Sunder, a 20-year-old rescued elephant was captured on camera, using a long twig to scratch its left ear. Using its trunk to hold the twig firmly, the male elephant rescued from a temple in Kolhapur, Maharashtra in 2014, scratched its left ear.

Similarly, it was also seen using its trunk to hold the twig to scratch inside its mouth, giving the impression as if it was using a toothpick to clear some food stuck between its teeth.

“Obviously elephants are very complex, we don’t think of them to be as intelligent but they have their own intelligence. With whatever resources available to them, they make the best use,” she said.

Menaka, another rescued elephant from a temple in the city, was also captured displaying similar behaviour.

The zoo officials were lucky to record the feats on video because the jumbos spend most of their time in the forest near the zoo.

“Elephants in the zoo are free ranging, they are left in the forest and the officials do not have the opportunity to see them throughout the day, depriving the officials of a chance to see their tool use behaviour,” said the official.

Other elephants also use tools but mostly to dust themselves but not the targeted use displayed by Sunder and Menaka.

The zoo has an elephant care centre where 23 Asian elephants are housed before releasing them in the forest everyday.

Every morning, the mahouts (handlers) bring the jumbos to the centre to feed, bathe and take care of them.

“The zoo mahouts track the movement of the elephants in the forest. Belonging to the Jenu Kruuba tribe, these mahouts have the skills to track the elephants and have also developed a close bond with them,” said the official.

Drag chain is one of the techniques used to track the elephants. A long chain tied to one leg of an elephant is left to drag when the animal moves, leaving a mark on the ground for the mahouts to easily find them.

Incidentally, the zoo has not radio tagged any of the elephants, which otherwise is an even easier tracking method.

According to Singh, tool use by elephants is not unique but the level of complexity varies from elephant to elephant.

Citing a study done at the Nagarhole National Park in 2001, she said elephants were documented modifying small tree branches to repel flies and said that the cerebral cortex in the jumbos is greater than any primate species.

“Hence, elephants are equivalent to great apes, such as chimpanzees and orangutans in terms of cognitive ability for tool use and manufacture. Other species such as crows and other birds, dolphins, monkeys and octopus also have been known to use tools to solve complex situations,” said Singh.

The biological park has four units — a zoo, a safari, a butterfly park and a rescue centre — occupying 732 hectares of land and accommodating 2,279 animals. (IANS)