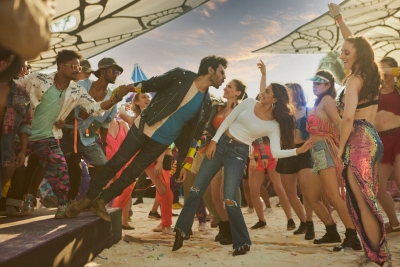 Meant to be steeped in mystery, with the usual ingredients of a ghost-centric film, replete with evil spirits and tantra-mantra, Anees Bazmee’s ‘Bhool Bhulaiyaa 2’, a sequel of the 2007 film of the same name, is an absolute entertainer, its exaggerated horror elements and slapstick humour, notwithstanding.

Manjulika, envious of her twin sister Anjulika, who is always the recipient of lavish praise from their father and gets the better deal in life, including the Kunwar (Amar Upadhayay), whom she secretly loves, kills Anjulika and takes her place.

Thence she impersonates her sister for 18 years, till Ruhan Randhawa (Kartik Aryan), who upon a chance meeting with a Medical student, Reet Thakur (Kiara Advani ), accompanies her (Reet) to the family haveli in Rajasthan to help cover up a lie. How they unravel the truth and present it to the world forms the crux of the 143 minutes narrative.

Kartik Aaryan shines as the fun-loving and confident Ruhan Randhawa, aka ‘Rooh baba’ in his comic avatar, and exudes charm aplenty. He is every inch the character and gets a massive platform to emote, dance, and display his acting prowess. The only scene where he is a let-down is owing to his poor Bengali accent in the Manjulika avatar.

Kiara Advani, as Reet, looks gorgeous and is competent, essaying her part with conviction.

Tabu, with her ace histrionics and get-up, does justice to her meaty role as the much-loved Bhabhi in the haveli, and her character, with its myriad shades, are full of intrigue.

Rajpal Yadav as Chota Pandit and Sanjay Mishra as Panditji are their usual self with their impeccable comic timing.

The dance sequences in this sequel, unfortunately, are not a patch on Vidya Balan’s ones, in the original. These lack the finesse and appear to be a tad tacky.

The song ‘Aami je tomar’ by Shreya Ghoshal is as soulful as ever and evokes nostalgia. The background score has been used aptly.

The intended jump scares and squeaky sound effects to create horror are a bit over-the-top in some scenes and ineffective- too.

Although the one-liners and punches are filmy and trite, they are well-delivered and situational and thus, evoke laughter. Especially, the scene, where everyone in the haveli sets out to search for Reet, who has been spotted by Chota Pandit.

The screenplay is complex but astutely handled. The plot appears to be a wee bit convoluted, and at times, confusing.

Well-shot, the cinematography, especially in the dark, horror sequences, deserves a mention.

Overall, one naturally, goes with a lot of expectations to watch ‘Bhool Bhulaiyaa 2’, comparing it to its prequel, but this one too sparkles in its 2.0 avatar. (IANS)