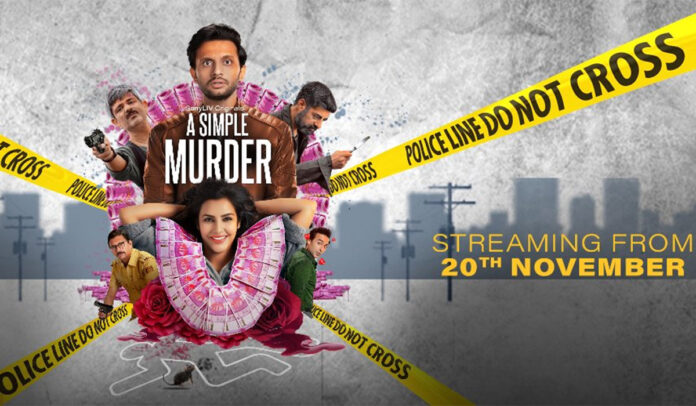 A Simple Murder does become contrived at times, given the willing suspension of disbelief it demands as the episodes roll, with unfailing frequency. But chances are you will not complain. This is a knotty naughty mix of crime and comedy, a little tangled but wholly enjoyable.

Black comedies largely score or slip depending on how well the wry tone in storytelling works. Here, director Sachin Pathak and his team of writers (Akhilesh Jaiswal and Prateek Payodhi) manage to keep the tempo of humour intact over 10 episodes with enough story to fill the runtime, and end on a note promising season two (yes there’s an open-ended finale, so fans would anxiously wait).

Shot against the backdrop of Delhi, the story is a ride on the loony side about supari killers and dirty money, made loonier as a few harmless souls get mixed up. Among them is Manish (Mohammed Zeeshan Ayyub), good-for-nothing nice guy with dreams to get his start-up up and running. He lives off his wife Priya (Priya Anand), actually. She is desperate to get rich quick, and will do just about anything to get what she wants.

A contract is given out by a Hindu Jaat minister on his daughter, because she has run away with her Muslim lover. Which brings into the picture a pandit who doubles as a contract agent (Yashpal Sharma) and a couple of supari killers (Sushant Singh and Amit Sial). Manish lands in the core of the chaos and Richa, realising there’s a bag stuffed with crores in all this, tags along, as does her sly boss Rahul (Ayaz Khan) with whom she is carrying on a fling on the side. Throw in a dim-witted Dilliwaala cop (Gopal Dutt) and his crafty deputy (Vikram Kochhar), and the picture is complete.

It is fun while it lasts, though erratic and full of loopholes. If you still grin and watch it, you realise it is because of the constant flow of wacky situations across the episodes.

You would instantly like the cast, too. Zeeshan Ayyub, feted for years for many effortless acts, finally comes on his own in an authorbacked role. Priya Anand’s claim to fame so far was primarily being one of the Fukrey girls. She impresses in a role that lets her play the field with shades of grey. Amit Sial, Sushant Singh and Yashpal Sharma live up to their billing as seasoned actors who never let a show down.

A Simple Murder works well if you are in the mood for a bout of binge watch that never gets too heavy. It’s dark comedy that keeps the narrative mood sunny all along. (IANS)