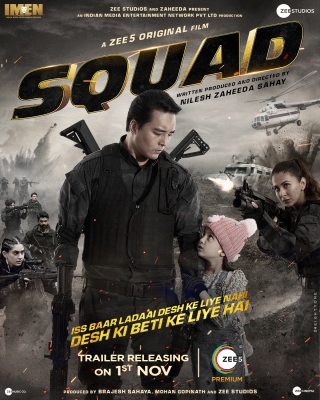 There is not much in ‘Squad’ and what is there, is awfully messy. Loaded with cinematic liberties, ‘Squad’ is a hackneyed action drama with a superficial story that lacks energy and spirit right from its lead actor to the direction in which the narrative rolls.

‘Squad’ is the story of six Special Task Force commandos who are teamed together by Nandini Rajput (Pooja Batra) for an ambiguous, ‘High-Risk Mission’, which is to rescue the kidnapped Mimi (Dishita Jain), the six-year-old granddaughter of Dr Banerjee, who is a renowned Indian scientist.

After creating robots to fight insurgents, Dr Banerjee has developed a lethal cyborg and thus is now the most sought after by “governments of several countries”. Also, we are told, the blueprint of the lethal cyborg programme, if it falls into the wrong hands, would mean the end of humanity.

“Hindustan ki beti hai aur isse badi wajah nahin hai,” is how Nandini motivates the team, and they take their job seriously. But the spoke in the wheel is Abhay Bhatnagar (Mohan Kapur), a bureaucrat who tries his best to jeopardise the squad’s efforts.

On the face of it, the film is a thriller, the takeaway, especially for Bhim. is a redemption assignment, because years ago, he had failed to save a young girl during a mission in Kashmir.

The film is designed as a patriotic action thriller, and the director takes his patriotic fervour rather seriously. He has incorporated patriotic rap numbers in the background of serious action sequences. This not only offsets the seriousness of the situation, but also borders on farce.

The best emotional moments surface when Mimi interacts with Bhim. Or when Bhim interacts with the young Kashmiri girl, who invariably haunts him. There is something sweet and sincere about Rinzing and his connection with the kids can be seen on screen.

On the performance front, debutant Rinzing Denzonpa takes his redemption role seriously. He earnestly delivers his lines with a blank visage. Also, since his romance plot is half-baked, the on-screen kiss seemed unwarranted. What stares you in the face is Rinzing’s lack of energy and charisma as an action hero, but that is not his fault, but the director’s.

The members of the team, along with Malvika Raaj Khurana, who is Bhim’s love interest, have very little to offer in terms of histrionics. Mohan Kapur and Pooja Batra, too, sleepwalk through their roles. Overall, ‘Squad’ fails to impress. (IANS)